The story behind the ‘safaris’ to meet the ANC-in-exile 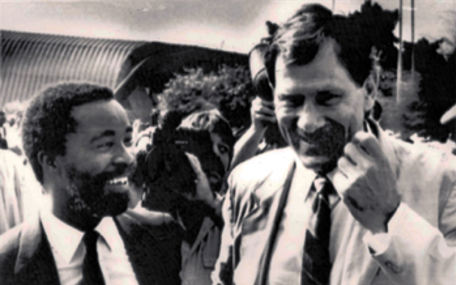 The meetings also stood in stark contrast to the violent unrest, widespread mutual political distrust, and racial tension in South Africa in the late 1980s. They took place with the tacit approval of some leaders of the apartheid government who were looking for covert ways to communicate with the ANC. Throughout the process, the Afrikaner delegates reported back to the hardline ‘securocrats’ in the military who had President PW Botha’s ear and who spoke the language of a ‘total onslaught’ against anti-apartheid organisations while Tambo and Mandela were also kept up to date by their party representatives.

Summary of discussion between the ANC and representatives of big business, Zambia 1985. South African History Archive 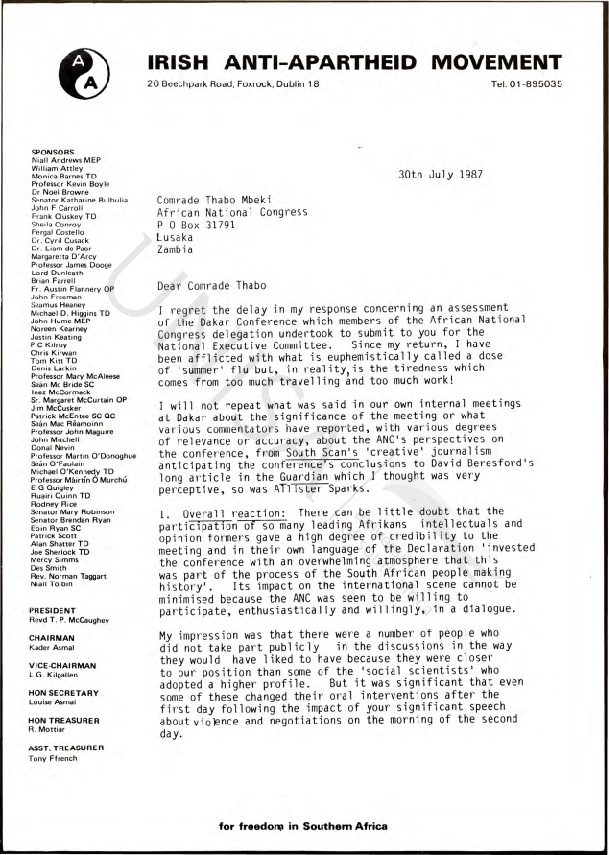 There were often free-ranging discussions on many issues including the armed struggle, the conditions for negotiations, the role of the SACP, political pluralism, the Afrikaner language, minority rights and how social and political change would happen in South Africa. Both sides expressed their fears and their hopes for the future. The talks helped to pave the way for the formal process of negotiations. The conferences unanimously expressed a preference for a negotiated resolution of the SA question. The unconditional release of all political prisoners and the unbanning of all organisations was an ANC prerequisite for negotiations to take place.

The meetings were both heavily criticised and unreservedly hailed as a major breakthrough. The SABC described the meetings as ‘political terrorism’ meeting ‘politcal impotence’. The State President, PW Botha, spoke out categorically against these meetings: ‘As long as the ANC is under communist leadership and causes violence in South Africa, there can be no question of my approving talks with them.’ The delegates were often met with protests on their return to South Africa. For example, when the IDASA delegates returned, attendees were met at the airport by demonstrators from the Afrikaner Weerstandsbeweging (AWB).

Indeed, the safaris culminated in the first-ever formal meeting between the ANC-in-exile and the government in a hotel in Lucerne in Switzerland on 12 September 1989. The meeting was a cloak and dagger affair. Both sides were extremely nervous, not sure of what to expect, and not sure if either side were to be trusted. The hours of talking that ensued led to the ANC representatives believing that they weren’t being led into a trap by the government. Ultimately, the decisive events that opened the clear road to negotiations were the Battle of Cuito Cuanavale, Namibian independence, and the Harare Declaration.

“I have a nightmare that we are going to get a message from PW [Botha] one of these days saying he is ready to negotiate, and we won’t understand it because we don’t know how they think.”

-Oliver Tambo, on initiating secret talks with members of the Afrikaner establishment

“Nothing that the government has said or done implies anything other than that a black will participate only as a black, a coloured as a coloured, an Indian as an Indian and a white as a white, in the political future of this country. This has, and continues to be, the fundamental difference in principle between myself and the government.”

“For me, reform means the government has to dismantle apartheid by restoring freedom of choice on non-racial, non-ethnic grounds. For the government, reform means making life as acceptable as possible for those who are not white in those structures where it will not allow freedom of choice on a non-racial, non-ethnic basis, i.e. primarily the Constitution of South Africa.”

“We have lived together; we have eaten together … In the course of that I think there is an understanding that has developed … None of us has had an experience like this before.”

–  Thabo Mbeki, then Tambo’s political secretary, top diplomat and leader of the SACP, reflecting on the Dakar encounter to journalist and biographer, Mark Gevisser

“Look, we Afrikaners thought we needed many things to secure our future … We thought if we didn’t have them, this black continent would swallow us up and the Afrikaners would cease to exist as a people. But the reality is that … we’ve not perished as a people since the Group Areas Act was rendered inoperable. That will open up the way to asking the question: Why do we need a white government anyway?”

– Professor Pieter de Lange, then Chair of the Afrikaner Broederbond, at his meeting with Thabo Mbeki, 1986

“We represented a wide range of political viewpoints which gave us an opportunity to represent to the ANC a wide range of hopes and fears of the white community. If we are to be part of a common and peaceful future, we need at least to understand each other …”

– Mike Olivier, then Chair of the Five Freedoms Forum (FFF)

“My approach was to identify players who are serious but not always visible and to bring them away so that they could begin to understand one another as human beings.”

– Michael Young, host of the talks at Mells Park in England

“The discussions have greatly improved mutual understanding; created a positive climate of expectations; brought a mutual moderation and realism to our politics; channelled important messages to Lusaka and Pretoria; and even included the germs of certain transactions … a bridge-building exercise between NP Afrikaners and the ANC …”

“I discarded preconceptions about the Afrikaner people. I was able to see people of great courage.”

– Barbara Masekela, then ANC Secretary for Arts and Culture

“I am prepared to entrust my life to Mbeki. The main reason is the way in which he understood the Afrikaners’ predicament – it was incredible.”

Read More : Timeline of some of the Encounters

September 1985
The first encounter was when representatives of the ANC met South African businessmen at Mfuwe Lodge hosted by Kenneth Kaunda, President of Zambia.
September 1985
1986
Thabo Mbeki met Pieter de Lange, the chairman of the Afrikaner Broederbond in a five-hour meeting in New York where they discussed Afrikaner minority rights under a democratic system with a Bill of Rights.

Later that year, De Lange wrote an article called “Basic Political Conditions for the Continuing Survival of the Afrikaner” which called for political reforms and the establishment of a democratic order in South Africa. This was circulated to the 17 000 Broederbond members, and formed a working document outlining the need for a negotiated settlement.
1986 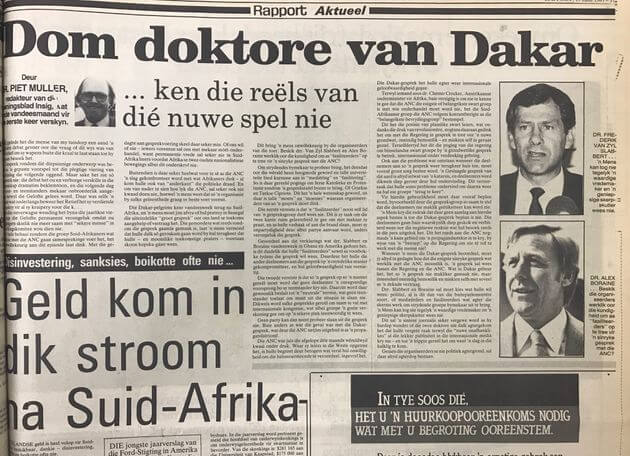 9 - 12 July 1987
The Senegalese President Abdou Diouf hosted the ANC and IDASA for a set of dialogues in Dakar.

The ongoing discussions between 62 delegates from the liberal Afrikaans establishment and the ANC became known as the ‘Dakar Safari’.

The conference discussed strategies for bringing fundamental change in South Africa, national unity, structures of the government, and the future of the economy in a free South Africa. The conference drew up the Dakar Declaration – a joint communique.

Image above:
Afrikaans Sunday newspaper Rapport carries this scathing indictment of the Dakar meeting, referring to Frederik van Zyl Slabbert and Alex Boraine as ‘the dumb doctors of Dakar’. Du Toit, P. “Dom doktore van Dakar”, 1987. Rapport
9 - 12 July 1987
October 1987
A series of secret talks-about-talks-about-talks began between a small group of ANC ‘diplomats’ with Afrikaner academics in England. The first meeting was held in the cellar of a hotel in Henley-on-Thames in the United Kingdom.

Later, talks were held at Mells Park, a house near Bath which belonged to the mining firm, Consolidated Goldfields.

These talks were hosted by Michael Young, the company’s public affairs director, after he had been asked by Tambo to set up dialogue.

Between November 1987 and May 1990, 12 meetings between verligte NP intelligentsia and the ANC were held at Mells Park in England. Mbeki later called the process ‘a negotiation within a negotiation’.
October 1987
September 1987
The FFF – a group of white anti-apartheid organisations – was established. The forum was named after five central ‘freedoms’: freedom from want, freedom from fear, freedom from discrimination, freedom of speech and association, and freedom of conscience.

In July 1989, the ANC-in-exile hosted a delegation of 115 white people representing 35 opposition organisations from the FFF at the ANC headquarters in Lusaka.
September 1987
1987
A series of talks and calls were held between Mbeki, Jacob Zuma and Aziz Pahad from the ANC, and National Intelligence Service (NIS) agents Mike Louw and Maritz Spaarwater in Lucerne, Switzerland. This became known as Operation Flair.
1987
12 September 1989
The first formal meeting took place between the ANC and government.

Mbeki and Zuma made their way to the Palace Hotel in Lucerne, Switzerland while being trailed by the NIS. They first flew to Brussels and then were driven by an ANC sympathiser.

Spaarwater and Louw were waiting for them at the hotel.

Mbeki broke the ice by proclaiming that the terrorists and communists had arrived.

The NIS agents reported to the government that the ANC was ready to talk. Despite a media leak in which De Klerk publicly accused members of his team of ‘destroying good order’ by these talks, he knew that the momentum was towards change.

Two weeks later, De Klerk released Sisulu and the other remaining Rivonia Trialists, and made hints that Mandela may follow.
12 September 1989
1990
Louw and Spaarwater met with Mbeki and Pahad on 6 February 1990, four days after De Klerk had unbanned the ANC and announced Mandela’s freedom, to finalise arrangements for political negotiations.
1990
FOR A MORE DETAILED TIMELINE, COMPILED BY PROFESSOR MICHAEL SAVAGE, CLICK HERE 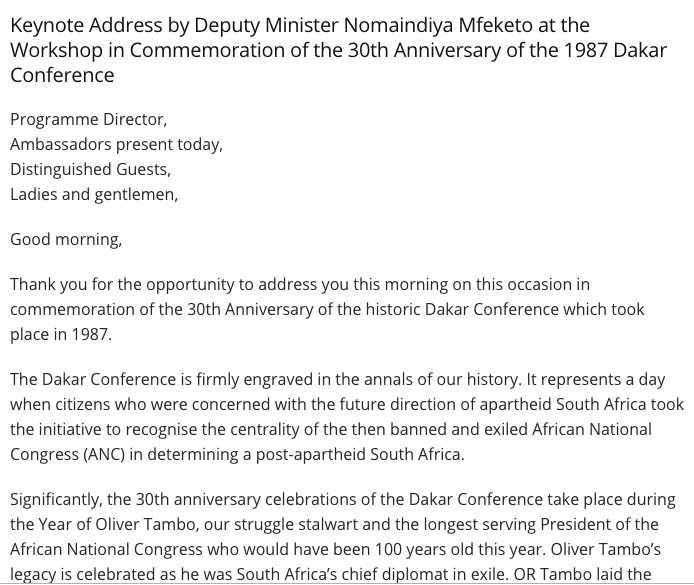 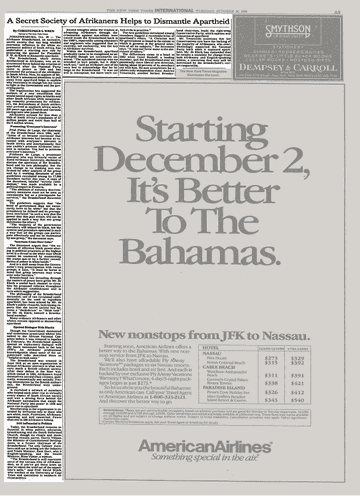