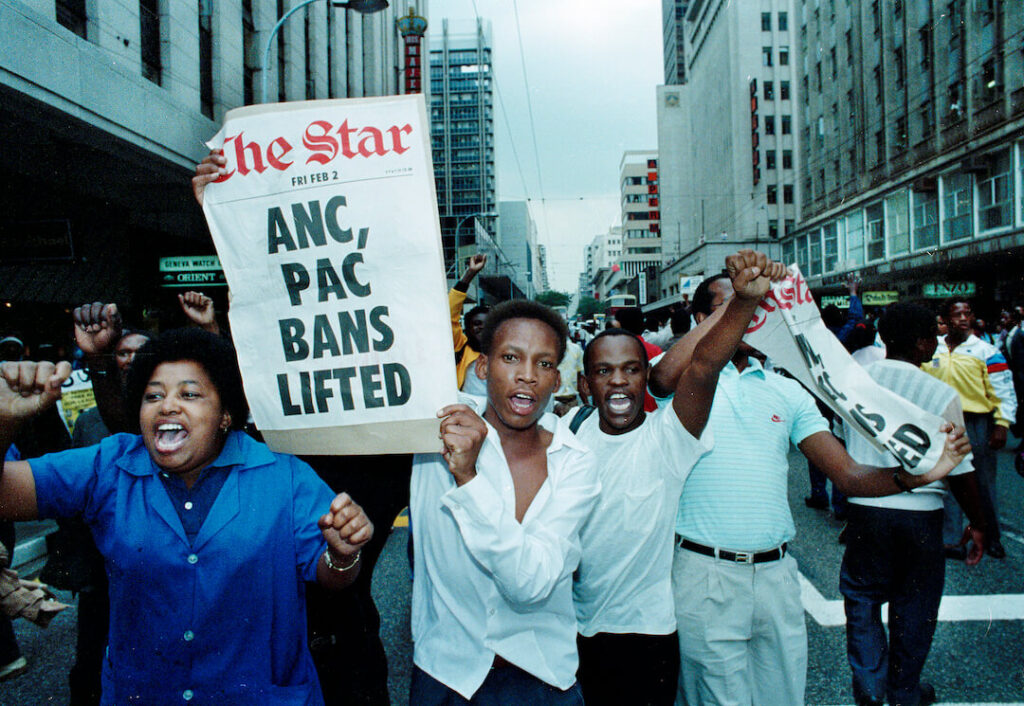 After the adoption of the Harare Declaration by the OAU, there were rapid developments inside the country. The Mass Democratic Movement had identified the upcoming whites-only elections as a focal point of struggle and organised a national Defiance Campaign entering ‘whites-only’ hospitals and beaches.

FW De Klerk replaced the ailing PW Botha as State President in the last whites-only election in South Africa. Although turnout was poor, and the NP only garnered 48% of votes – the first time they had not won a majority since the 1960s. The police used their unprecedented powers granted by the State of Emergency against protestors on election day. At least 20 anti-apartheid activists were killed.

In a state of despair around the violence, Archbishop Desmond Tutu called for a peace march. The night before the event, despite permission not having been sought, the government announced that it would ‘allow’ the march to go ahead. Thirty thousand people pitched up at St. George’s Cathedral. They were led through the streets of Cape Town by Tutu, Reverend Allan Boesak, leaders of the inter-faith movement, the United Democratic Front and the Mayor of Cape Town. This event became a tipping point in the anti-apartheid struggle. 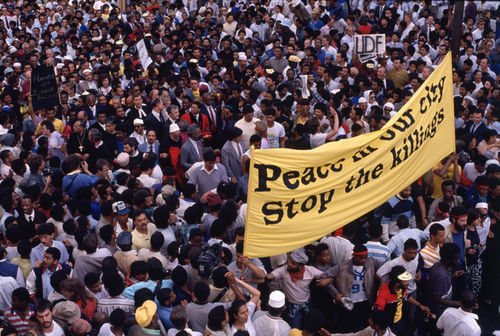 De Klerk unconditionally released seven high-profile political prisoners, including the ANC’s Walter Sisulu and the PAC’s Oscar Mpetha. Then, in early December, De Klerk led a fifty-person NP delegation to a bosberaad (meeting) in the Nyala game reserve, in order to brainstorm solutions to the South African crisis. By all accounts, the delegates reached an agreement fairly quickly on the release of prisoners, but there were heated debates about the unbanning of political organisations, especially the SACP. 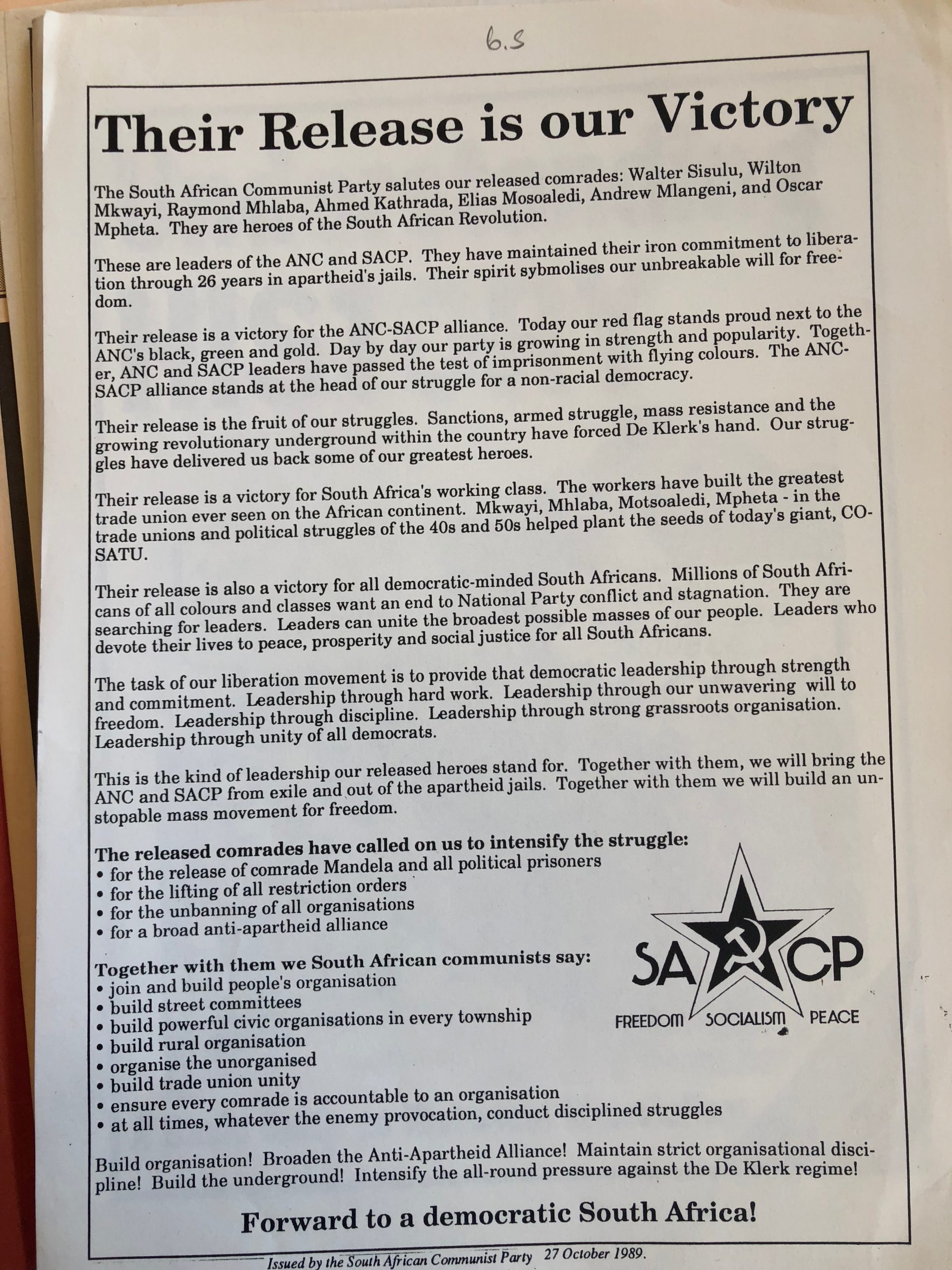 At the opening of Parliament, people packed the public gallery and hordes of pressmen waited expectantly, hoping to hear De Klerk announcing Mandela’s release. The President opened his historic speech by saying: “The general election on 6 September 1989 placed our country irrevocably on the road of drastic change. Underlying this is the growing realisation by an increasing number of South Africans that only a negotiated understanding among the representative leaders of the entire population can ensure lasting peace.”

De Klerk went on to meet most of the conditions stipulated in the Harare Declaration: the unbanning of the ANC, the PAC, and the SACP; the lifting of the State of Emergency; the immediate release of all political prisoners; the unconditional return of exiles; and the freedom for trade unions to function openly. Although De Klerk did not release Mandela on that day, he did make a public commitment to do so. He ended his speech with a broad invitation to all organisations to ‘walk through the open door’. 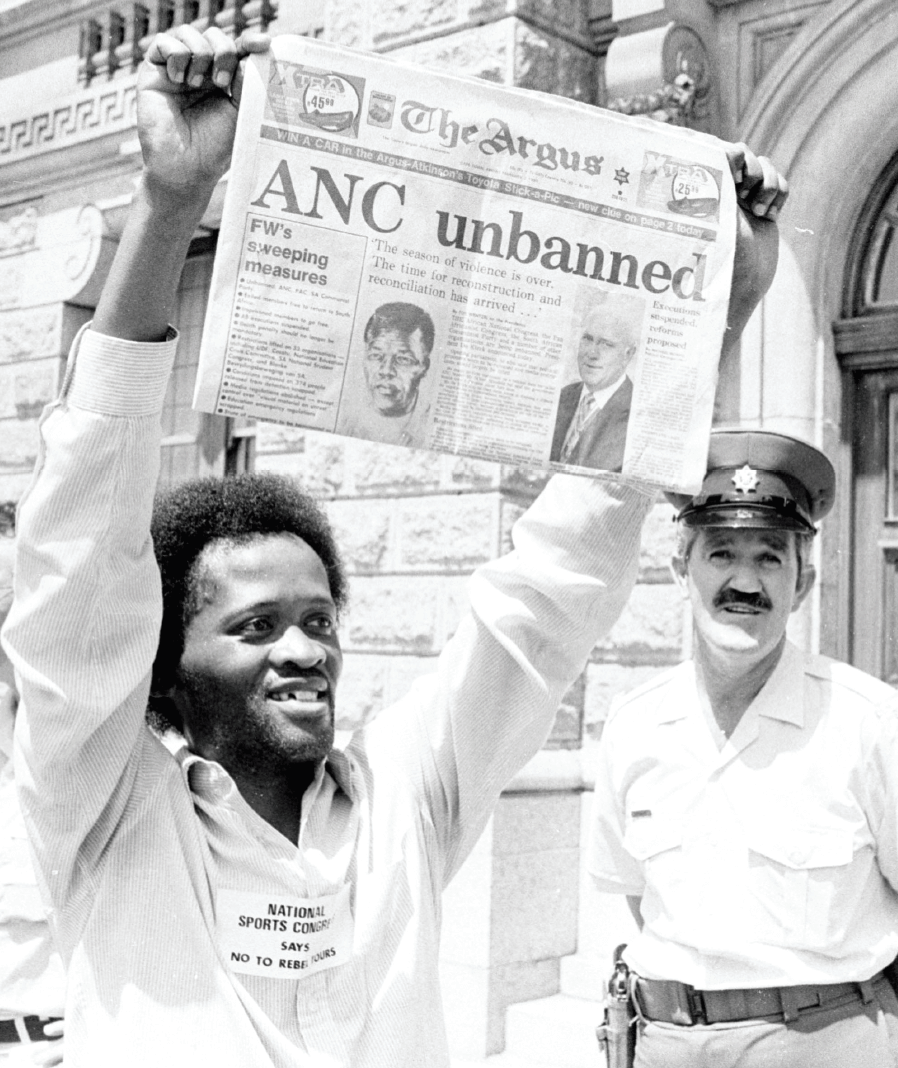 Photograph of a young man holding a local newspaper announcing that the ANC has been unbanned, taken in Cape Town during a demonstration of anti-apartheid marchers demanding the release of all political prisoners in South Africa, 2 February 1990. Benny Gool / Oryx Archives

The country, and indeed the whole world, was stunned. De Klerk had told no one of his plans. These sweeping reforms placed South Africa irrevocably on a path of a negotiated transition from apartheid to a democracy. Responses to the speech from those within the ranks of the ANC and PAC were mixed, with some believing that this was a genuine moment of change and a time to start negotiations, while others still distrusted the government entirely and continued to advocate for a ‘seizure of power’. 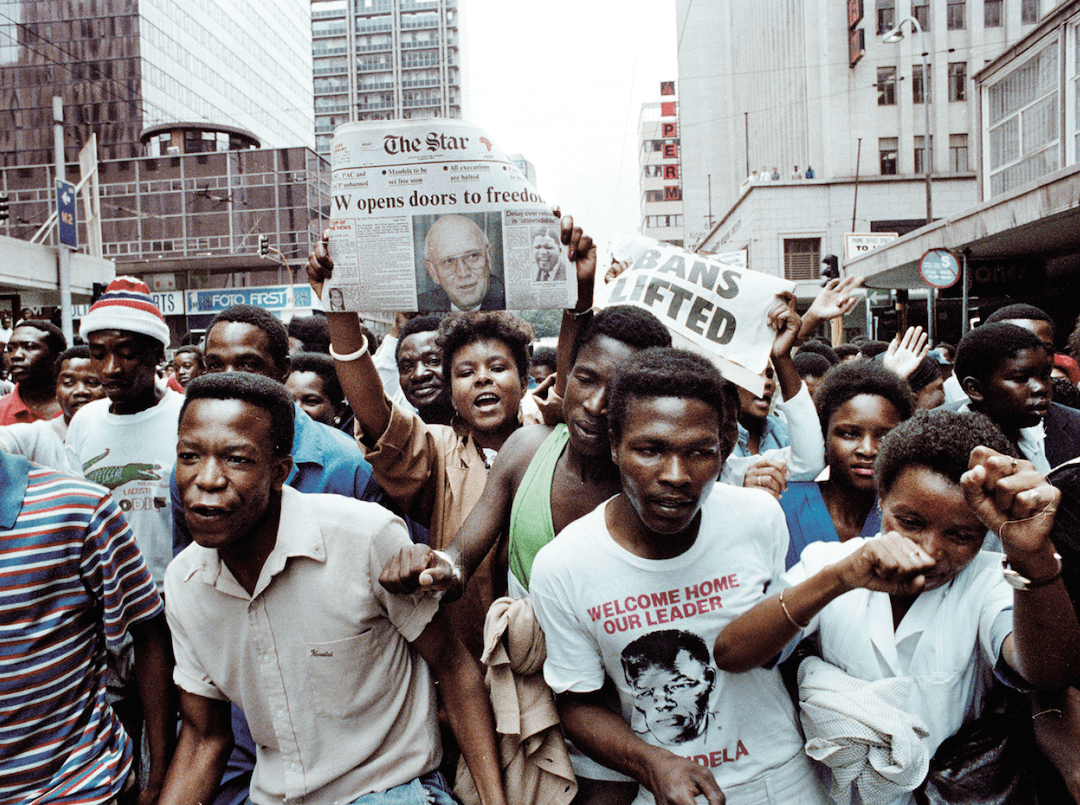 A jubilant crowd after the announcement of Mandela’s release. Graeme Williams 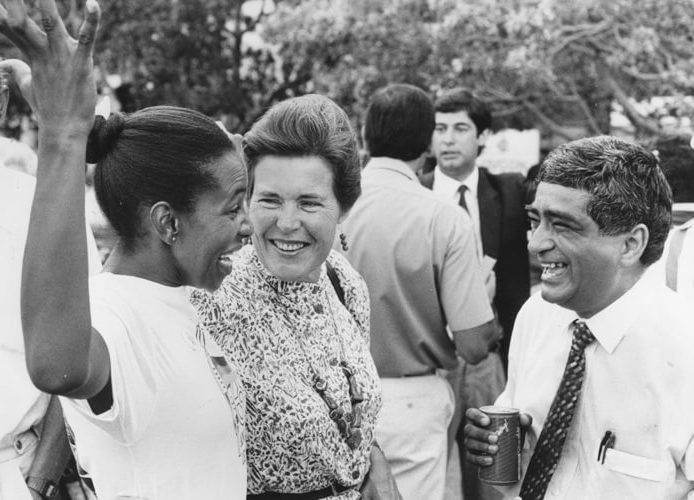 On 9 February 1990, De Klerk summoned Mandela to the Presidential residence of Tuynhuys at 18:00 where he informed Mandela that he planned to release him the following day. De Klerk’s plan was to fly Mandela to Johannesburg first and release him there. Mandela categorically objected to this arrangement. He insisted on a week’s notice to inform his family and the ANC so that they could plan for the occasion. Moreover, he wanted to walk out of the gates of Victor Verster Prison to thank those in Cape Town who had supported him. After a tense moment, De Klerk partially acceded to his demands – Mandela was to be released from prison two days later.

At 16:16, the ‘prisoner of the century’ took his first steps as a free man. Thousands of South Africans and media from across the globe thronged the prison gates and watched the tall and dignified 71-year-old Mandela thrust a clenched fist into the air with his wife, Winnie Mandela, at his side. 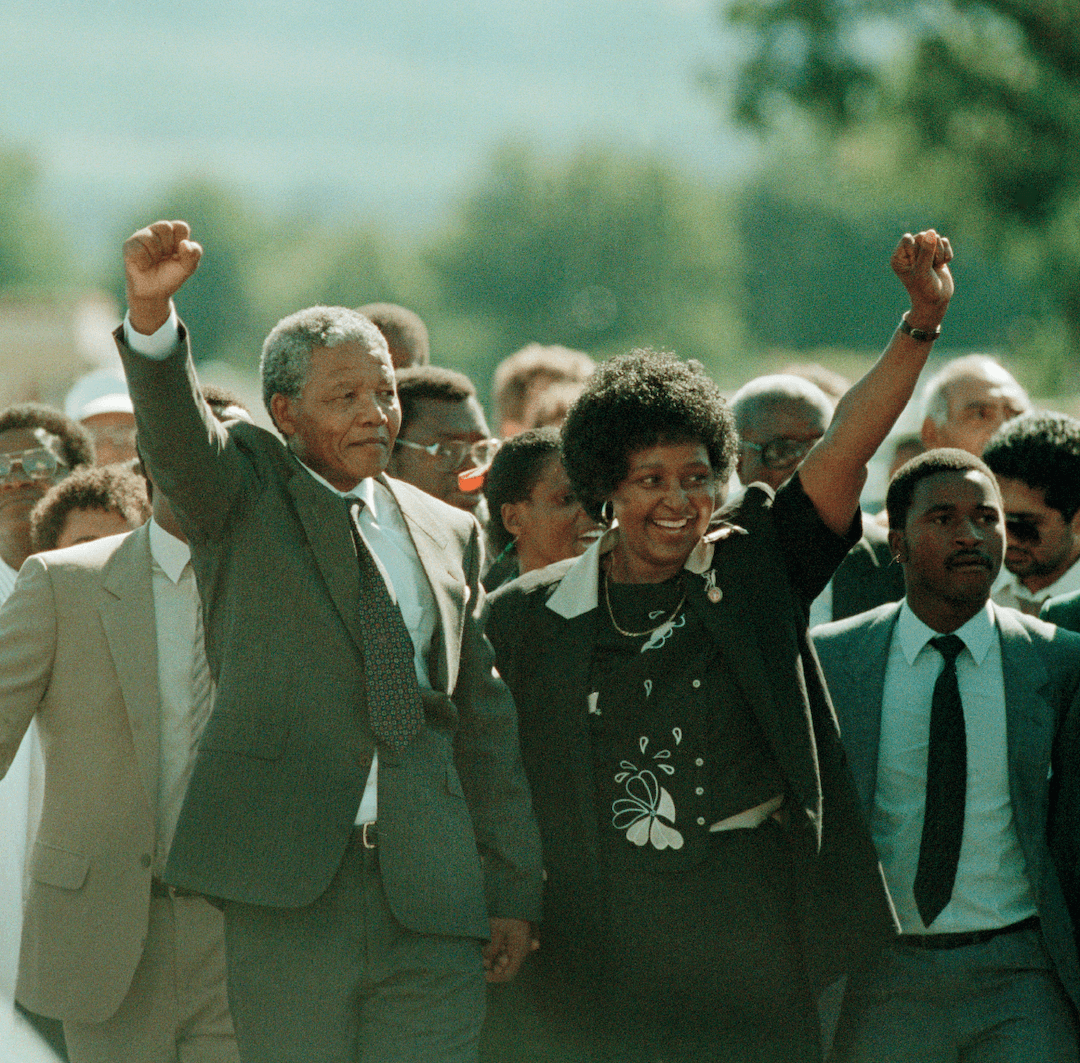 Nelson Mandela, flanked by the members of the National Reception Committee, is seen holding the hand of his wife Winnie Mandela, 11 February 1990. Graeme Williams 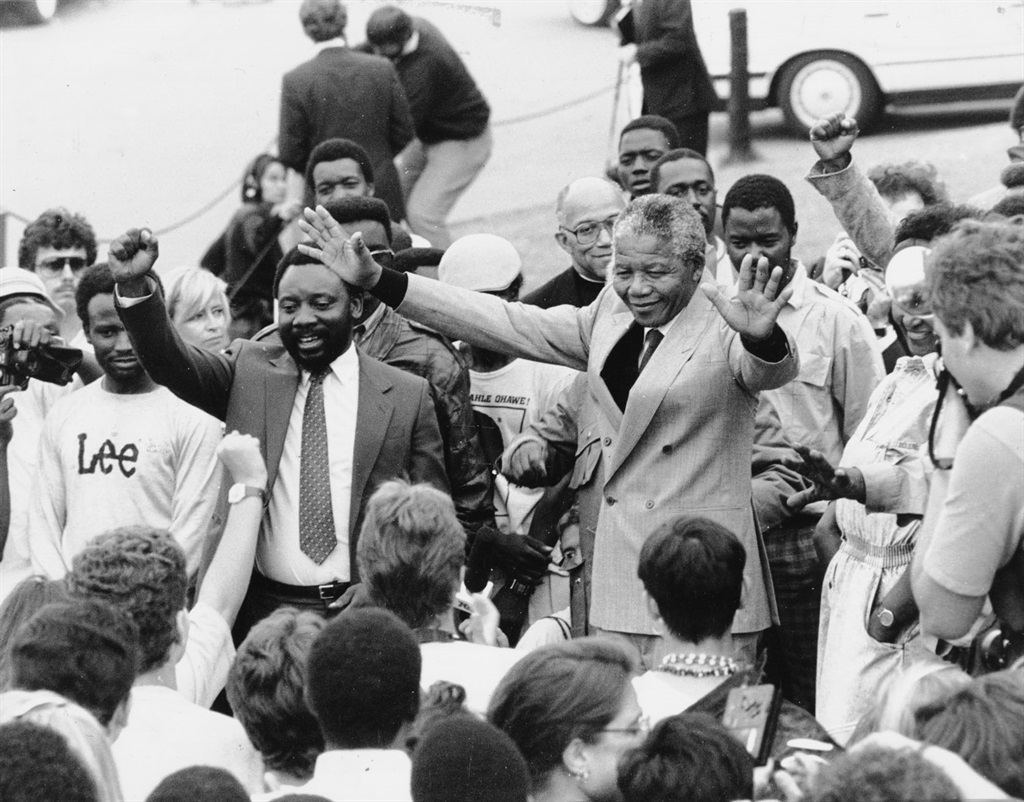 “We didn’t have the moral high ground to defend our own position any longer. We are becoming weak from within. And in any event, we’d become the polecat of the world. And the world is going to force us to change.”

“I felt quite angry. The NP had once again lied to the people. [In the run up to] the ’89 election, they made it absolutely clear [to the electorate] that they will not negotiate with the ANC … that the worst thing that can happen is black majority rule … The concept of unbanning the ANC and SACP, releasing Mr Mandela, those things were never even thought to be possible.”

“[FW’s speech in 1990] came as a surprise because three years ago, he was fairly conservative and we in the Labour Party questioned the rightness, for instance, of his caucus of choosing him above Pik Botha or others whom we saw as the enlightened ones. We thought he was going to say something important but not go as far as he did.”

-Allan Hendrickse, then leader of the Labour Party in Parliament

“I remember sitting with Thabo the day after De Klerk’s speech, and as far as Thabo can go white, he was white … What do we do now?”, he asked. “We can’t say, put Mandela back in prison!”

“Now there really is no other option but to talk. [De Klerk’s speech] was a genuine and positive move forward.”

-Thabo Mbeki, then Tambo’s political secretary, and Head of the ANC’s Department of International Affairs

“When the unbanning happened, we continued with what we were doing until we were given other instructions … We behaved as normal soldiers would, following the instructions of the ANC.”

–Siphiwe Nyanda, then MK leader operating in the ANC underground

“Nothing has changed. We need to infiltrate more cadres into the country.”

-Chris Hani, then leader of the SACP and chief of staff of MK, the armed wing of the ANC

“Both ANC and PAC cadres were so angry. We felt outwitted by FW de Klerk … Across the political divide, we would have preferred an escalation of guerrilla war. As a matter of fact, MK and APLA … used to say that until De Klerk’s army raised their white flag, you know, until they surrender, we would feel we are not there.”

-Walter Sisulu, at a rally attended by tens of thousands of ANC supporters in Soweto after his release 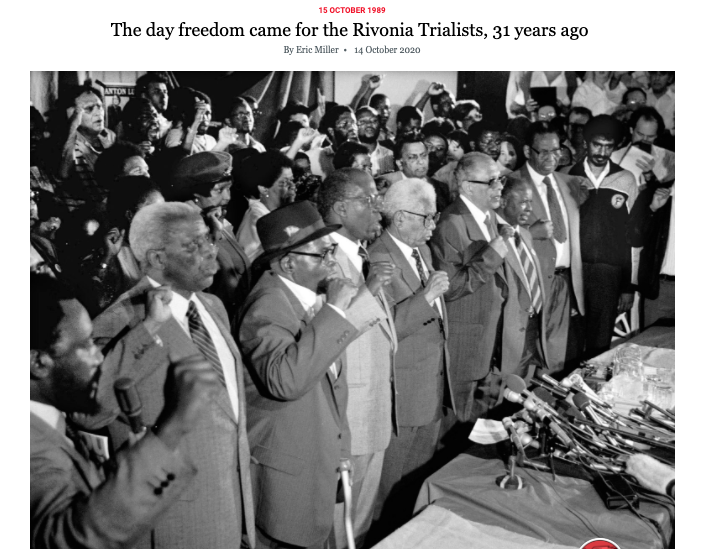 The day freedom came for the Rivonia Trialists, 31 years ago. Eric Miller, The Daily Maverick
Menu