The demand for an Afrikaner Volkstaat (state) 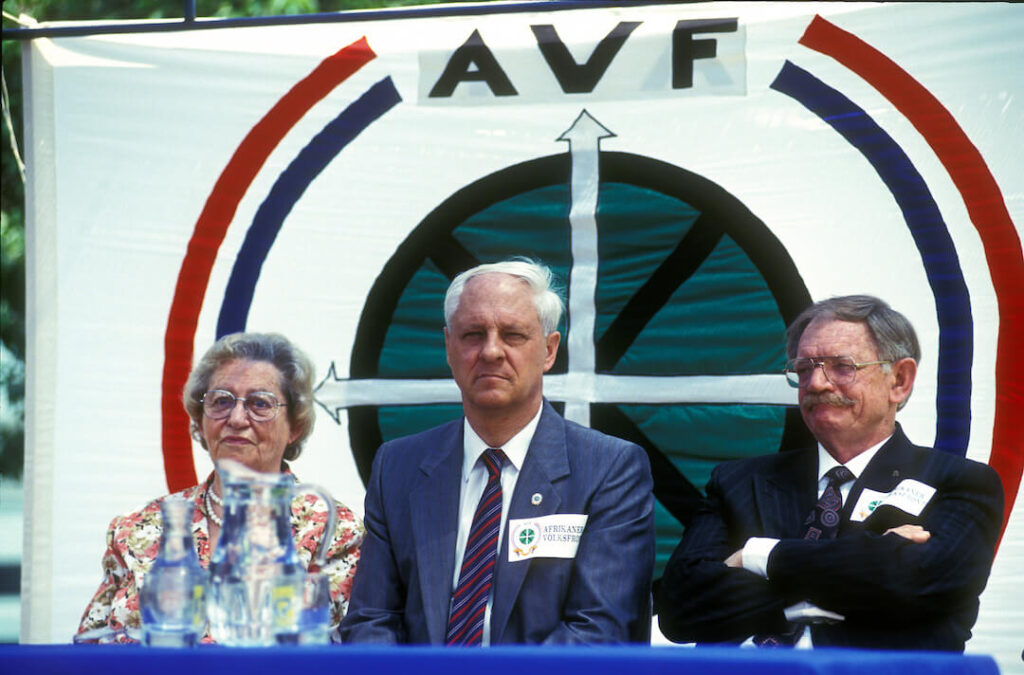 A hardening
of attitudes:

The ANC and AVF entered into dialogue with one another and wrote up, but did not sign, a Memorandum of Agreement (MOA), dated 21 December 1993. But in the early months of 1994, attitudes hardened among the rank and file of other right-wing organisations. They took an increasingly hard line against General Viljoen over his failure to secure a Volkstaat by force. They booed and shouted their leader down at a rally where he suggested that Afrikaners might consider participating in the elections. Viljoen assured his followers that ‘nothing but nothing could stop the Afrikaner from attaining his freedom’. 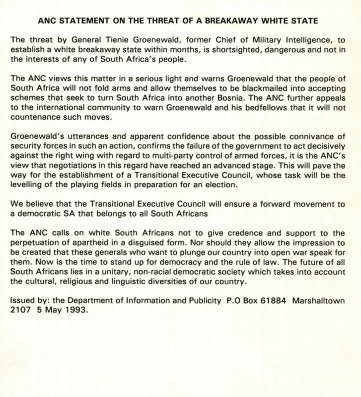 Just weeks before the elections, in an attempt to avert a civil war, Nelson Mandela persuaded Viljoen and the AVF to meet with him. The AVF told Mandela that they were worried that a united non-racial democratic South Africa would forever extinguish their dream of Afrikaners having sovereign control over their own affairs on their own piece of land. They insisted that a clause be added to the Interim Constitution recognising the possibility of a Volkstaat.

At this time, both the ANC and National Party (NP) were anxiously trying to ensure a peaceful transition to democracy. Mandela argued that it would be better for the country if the AVF discovered for themselves that there was no part of South Africa where such a region could exist, rather than forcing them to accept the extinction of their dream. He persuaded his National Executive Committee (NEC) to give far-right Afrikaners a dignified route to enter into the democratic dispensation.

A Memorandum
of Agreement:

A formal agreement was hammered out and signed between the ANC, the NP, and the Freedom Front (FF), Viljoen’s new party, just four days before the elections – on 23 April 1994. The right-wing hawks in the AVF opposed this agreement and vowed to disrupt elections.

The Accord on
Afrikaner self-determination:

This last-minute agreement outlined how an Afrikaner self-determination could be pursued through a process of negotiation. It stipulated that any provision around a Volkstaat in the final Constitution should be subject to three qualifications: 1. only the new democratic Parliament would have the power to establish the proposed Volkstaat; 2. the creation of such a state would have to have the support of the majority of people within its boundaries; and 3. the Volkstaat would have to be governed on a non-racial basis.

As Mandela had predicted, the Volkstaat notion proved to be totally unfeasible in practice, even though the idea lives on in Clause 235 of the final Constitution of 1996. As Mandela had hoped, instead of remaining an outsider threatening to challenge the new constitutional order, Viljoen registered the FF ten minutes before the deadline for participation in the 1994 elections expired. A violent uprising by armed Afrikaners was avoided, and Viljoen became a distinctive figure in the new democratic Parliament. 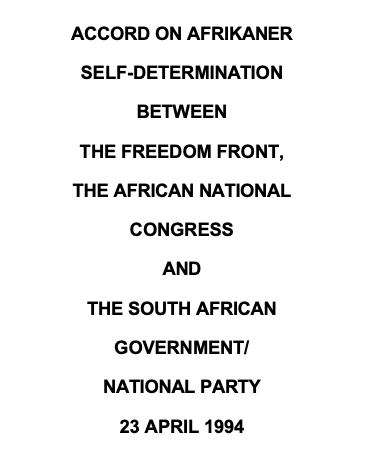 Unsigned copy of MOA of the Accord on Afrikaner Self-Determination.

“Now what we had in mind on self-determination … was a separate Volkstaat. To hell with the new South Africa.”

“The threat … to establish a white breakaway state … is short-sighted, dangerous, and not in the interests of any of South Africa’s people. The ANC … warns that the people of South Africa will not … allow themselves to be blackmailed into accepting schemes that … support the perpetuation of apartheid in a disguised form.”

“We were part of the team that sat down with Constand Viljoen … to show them that there was a future for all of us if only we behave slightly differently … We were being told [by Mandela] that their needs must be addressed and we need to find a neat formula to deal with this.”

-Penuell Maduna, then member of the ANC Constitutional Committee

“In the negotiations, the ANC said, ‘right, what do you want?’ And we were forced then to word certain things and say really what we mean by self-determination … We had internal problems in a certain sense because … we didn’t know exactly what we wanted.”

–Pieter Mulder, co-founder of the Freedom Front in 1994

“The ANC were much more reasonable than we had expected. There was honesty between us. In fact, we agreed afterwards that we could get along better with the ANC than with the NP … Mandela created a way for the Afrikaner community to participate in the new South Africa.”

-Constand Viljoen, former General of the SADF and leader of the AVF, after the first meeting with members of the ANC

“What brought people like Constand Viljoen to their senses, was the realisation that the route of violence is not the answer, that they would rather go forward through peaceful negotiations.”

–Cyril Ramaphosa, then Chair of the ANC’s Negotiations Commission

“If we decided to grab an area, we would have used the Afrikaner Volksfront forces to go to that area, make a stand to say here we are … It would have been a method of forcing the ANC and the NP to accept the idea of a Volkstaat because we all realised that we could not indefinitely carry on a war.”

-Constand Viljoen, former General of the SADF, explaining the difficulty of identifying land for the Volkstaat

“In my mind there was never room for the self-determination ideas advanced by the conservatives because it was nothing more than a sugar-coated white ‘homeland’.”

“We had to come to some kind of agreement to avoid a bloodbath. And this was the MOA signed on 26 April 1994 … The problem was that we had the means to turn to violence if we wanted to.”

-Major-General Tienie Groenewald, retired Chief Director of Military Intelligence and a founder of the Freedom Front

“Constand Viljoen was a soldier’s soldier. I held him in high regard. He was worthy of respect. But when he turned political after his retirement, he rubbed me the wrong way … His idea of an Afrikaner Volkstaat was something I had opposed my whole political career … It is unthinkable that he believed he could violently occupy a piece of South Africa.

After the 1994 elections, he continued to flirt with the idea of a Volkstaat. At one stage his Volkstaat included my hometown of Krugersdorp. He hinted that Nelson Mandela would be sympathetic to such an idea. This was revolting – not only the idea of Volkstaat, but having the temerity of hiding behind Nelson Mandela. I was livid … I voiced my opposition … and canvassed the support of the ANC mayor Stephen Motingua. We agreed that should Mandela support Viljoen, we would oppose it and march together.

Viljoen jumped on his high horse and accused me of being disrespectful … My colleagues criticised me and said I was too aggressive and should have shown Viljoen more respect.

In the face of this fierce opposition he trotted off to seek greener Volkstaat pastures elsewhere. When he retired from politics, he lamented that he didn’t receive the support for his Volkstaat from Afrikanerdom.” 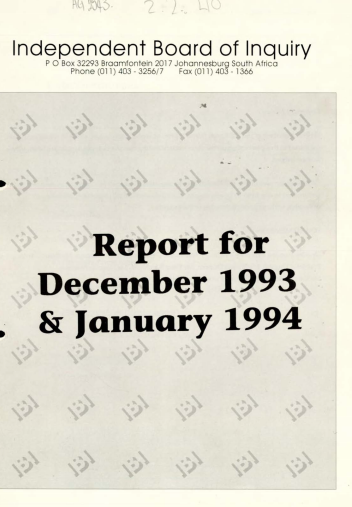