Events leading up to the signing of the Harare Declaration 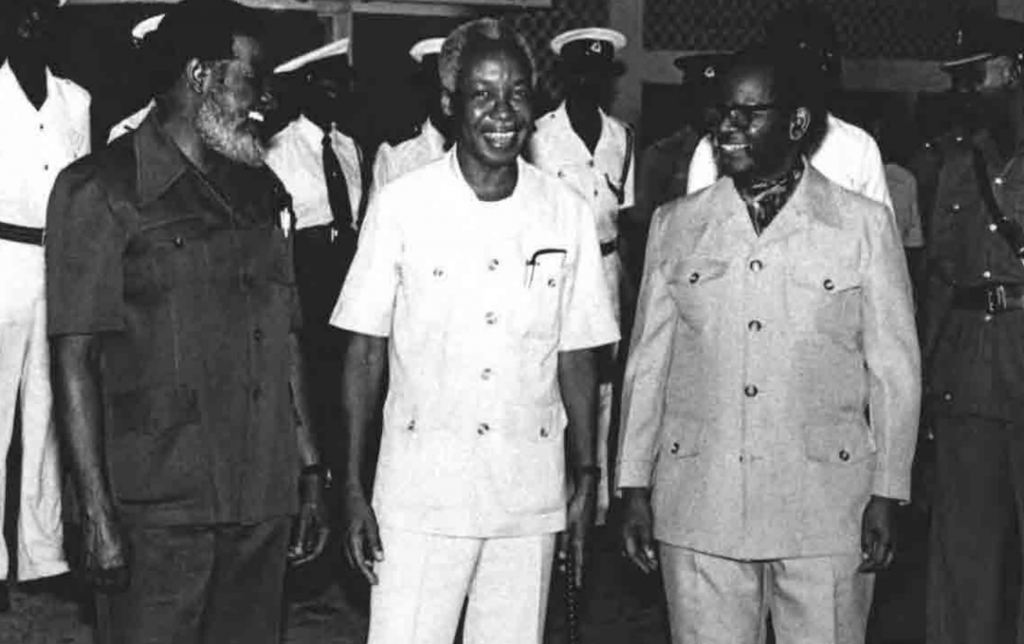 During the late 1980s, the apartheid government was asserting its control through increasing violence. At the same time, Tambo, the President of the ANC-in-exile, realised that a negotiated solution to South Africa’s conflict may become the preferred way forward for the ANC as well as for other African countries.

Of importance at this time was the impact of the Battle of Cuito Cuanavale in which the South African Defence Force suffered heavy losses in a fierce battle with the People’s Armed Forces for the Liberation of Angola (FAPLA) supported by Cuban soldiers. This clash, which ended in March 1988, took place in the southern part of Angola, close to South West Africa, a territory then occupied and controlled by South Africa. The significance of the battle was not who won – both sides claimed victory. Rather, it was how it led to the South African government agreeing to the United Nations sending a military and administration group to organise elections and independence for Namibia.

While Tambo and others in the ANC celebrated the move towards Namibia’s independence, they were anxious to avoid allowing international forces to take over the process of negotiations to end apartheid. The ANC were concerned that the UN, under the guise of protecting the white minority from abuse, would entrench a system of racially-based power sharing which would give white people a permanent minority veto in any future constitutional foundation.

Tambo briefed an internal committee to set down the ANC’s bottom lines if Pretoria extended an offer to negotiate. The committee – including Joel Netshitenzhe, Jeremy Cronin, Penuell Maduna, and Neo Mnumzana – drew on the ANC’s Constitutional Guidelines published in 1988 which set out the foundational principles for a constitutional democracy in South Africa.

Tambo set out to convince the frontline states and the OAU to accept the terms on which negotiations with the apartheid government would happen. Accompanied by Maduna, Mbeki and others, Tambo travelled around the continent consulting and seeking support from African leaders.

The final draft of the document drew on Tambo’s consultations with African leaders, the Constitutional Guidelines as well as on input from the Mass Democratic Movement in South Africa and the Mandela Document which contained a vision for a new political dispensation (Mandela had managed to smuggle a copy of his document to ANC headquarters in Lusaka).

After all the consultations and at the request of Robert Mugabe, the Harare Declaration was signed at a meeting of the OAU in October 1989 in Harare. Hence the name of the document. Sadly, as Maduna recounts, “when we went to Harare, the document’s chief steward, Oliver Tambo – the old man with thick glasses who babysat the document, marking our work as though he were a school principal – had had a massive stroke … So, the delegation was led by Alfred Nzo, the ANC’s secretary general. But we put up a good show and the document got admitted.”  Next, the Commonwealth and then the UN endorsed it as the platform for negotiations in South Africa. Its adoption secured the ANC’s role as the main player in forging a political settlement in the country. 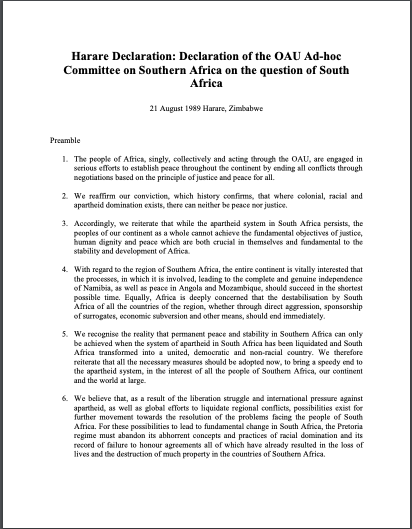 The Harare Declaration affirmed the ANC’s commitment to a united, non-racial democracy, and consolidated that Africa should take the reins of determining the process for genuine negotiations to reach a political settlement in South Africa. The document set out to use negotiations as a lever to free political prisoners, ensure the return of exiles, get troops out of the townships, and ensure free political activity in the country.

At the ‘Conference for a Democratic Future’, 6 000 representatives of the Mass Democratic Movement passed a resolution in favour of negotiations. Four days later, Mandela met the newly elected President, FW De Klerk, for the first time. Mandela demanded that he endorse the conditions outlined in the Harare Declaration – De Klerk made no promises. Not all groupings within the liberation movement supported the move to negotiations, with some believing that the armed struggle was the only road to freedom. 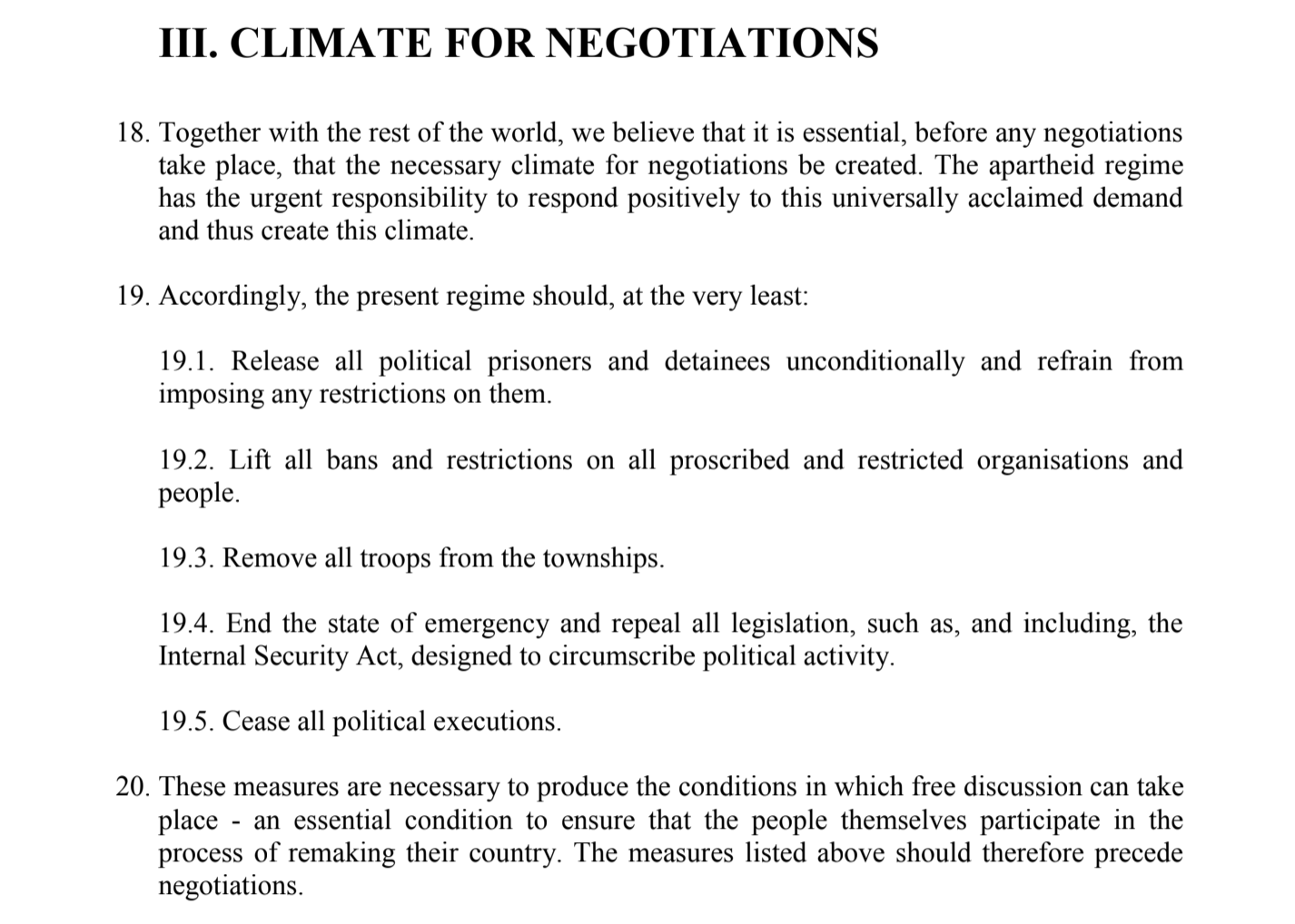 Clause 19.1 of the Declaration laid the foundations for a new beginning
for the country. 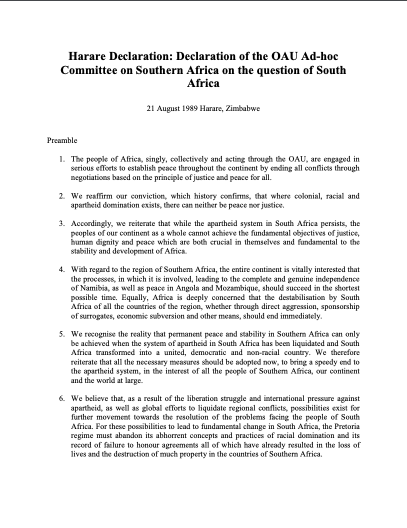 “[Oliver Tambo] crisscrossed the African continent basically arguing that at some point we will be asked to negotiate and that we must do so from a position of strength and with a very clear view of how we are approaching it, not just as the ANC but as the OAU … He mobilised as many African countries behind him as possible and … prepared the ground for the Harare Declaration.”

“So we are in Tanzania … Nyerere tells Tambo the defects in our document … He says, ‘Right now you hold the moral high ground so do not put into your document things that are or may turn out to be conditions that become incapable to implement. Remember you have the leadership responsibility here’. The following morning we show Nyerere a new document and now he says, ‘I’m happy with this’. We then fly to see the other leaders – Masire in Botswana, dos Santos in Angola. All of them agree to this document. The last one is Robert Mugabe.”

“You haven’t defeated these people. That’s why you are negotiating with them. And therefore you have to create a necessary space that recognises that this is not a defeated force.”

-Julius Nyerere, then President of Tanzania to Oliver Tambo

“Before the declaration could be adopted, Tambo wanted Mandela and other leaders to read the document. I commandeered the services of Ismail Ayob, Mandela’s lawyer who was able to visit him in prison. I advised him to mention Mandela’s codename for me – Zwengendaba – and then I told Ayob that to pass this note into Mandela’s hand under the table. It was going to be a tiny piece of paper, typed out, narrow column like that and rolled. Mandela fumbled and dropped the piece of paper but finally managed to read it in the toilet, while Ayob’s wife Jamilla distracted the guards.”

–Mac Maharaj, then member of the ANC NEC

“The Declaration constituted an unequivocal statement by our movement and the rest of the world, that the entirety of the national and international movement for our liberation, united against apartheid, was … ready to begin conversations with those whom history had defined as our oppressors …”

-Thabo Mbeki, then Tambo’s political secretary, and Head of the ANC’s Department of International Affairs

“The ball is now in Pretoria’s Court.”

-Kenneth Kaunda, then President of Zambia

“We felt betrayed by the Harare Declaration … Even Mugabe’s ZANU-PF told us that they felt our arms struggle was ill-fated. We distanced ourselves from the Declaration’ conditions and terms. The PAC and APLA were instructed to intensify the arms struggle … Fresh from prison, I infiltrated into the country. We felt that if we hit harder, maybe the negotiations were going to be derailed and PAC once more would occupy the centre stage.”

“The tiger doesn’t change his spots … We must move directly in with our AKs.”

“But whereas our people and the rest of progressive humanity are determined to ensure that apartheid disappears in its substance and its entirety, the Pretoria regime desires that it should appear to have disappeared by dressing it in new clothes. What they fail to realise is that, because of our struggle, supported by the international community , apartheid will indeed vanish forever, despite its new clothes and together with that new apparel, however pretty and well-tailored it might seem.”

–Oliver Tambo’s statement made at the Assembly of Heads of State of the OAU, Addis Ababa, July 1989
Menu