Stunned back to the
negotiating table:

While Boipatong had caused the negotiations to be broken off, the bloodshed at Bisho led both sides to seek solutions. A week after the massacre, Mandela compressed the ANC’s 14 preconditions for resuming talks to three – the release of 200 disputed political prisoners, the ban on cultural weapons, and the fencing off of 18 migrant workers’ hostels in the Witwatersrand area. Mandela promised that if these demands were met, he would be able to go back to his people and say, ‘Look [De Klerk] has met us. Let us meet him.’

A protestor holds a sign calling for the ousting of those responsible for the Bisho Massacre. Adil Bradlow

The Cyril-Roelf channel decided that they would first try to reach an agreement on a bilateral basis before approaching the other parties for multilateral negotiations. Together with their internal teams, they worked feverishly to develop an agreement that would allow negotiations to resume. On the evening before the planned summit between the government and the ANC, Mandela put his foot down and told his negotiating team:

“I need to see prisoners – especially those on death row – being released not in the foreseeable future or planned time, but now! I am not going into that negotiation without that happening.”

At this point, Mandela called De Klerk out of a cabinet meeting to communicate his position. There was much to-ing and fro-ing between the two men over the next hours. At first De Klerk told Mandela that his hands were tied, but after Mandela stood firm, De Klerk announced that the government would accept the ANC’s demands. This was considered a turning point moment in the negotiations. Mandela’s insistence had at last resolved the issue of the release of political prisoners.

On 26 September, Mandela and De Klerk sealed their commitment to negotiations by signing the Record of Understanding, which resolved the central drama of the constitution-making process and led to the resumption of negotiations. Significantly, the NP abandoned its demand for ‘entrenchment of power sharing as a constitutional principle’ and its insistence on group rights.

Instead of
minority vetoes:

The Record of Understanding also committed the government to democratic elections on a national common voters roll covering the whole of South Africa to choose the members of a non-racial Parliament; the release of political prisoners; and prohibiting the carrying and display of dangerous weapons at all public gatherings countrywide. The ANC on the other hand accepted an interim constitution that was not a minimal arrangement, but in the words of Meyer, a fully-fledged ‘complete constitution’ including a full-scale Bill of Rights that would prevent ‘a constitutional hiatus’.

The Record of Understanding was thus seen as the political settlement between the ANC and NP and the government’s decisive break with the IFP. 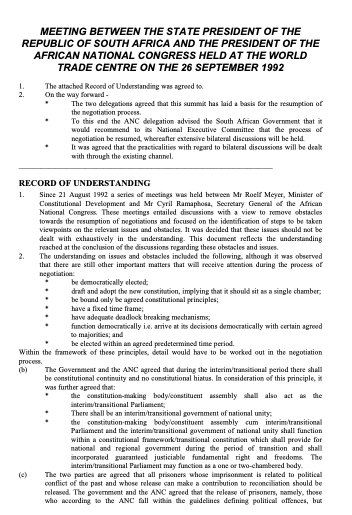 “Madiba says to De Klerk: ‘Tomorrow morning we have a scheduled summit in front of the world media … I will say to them that … I do not accept the views of the government because they have refused to release these political prisoners. If you want that, that’s what I will say. If you don’t want that and you want us to carry on then you better change this view’.

De Klerk says, ‘I can’t take this decision alone. There’s something called the rule of law and the courts have taken decisions I cannot just unilaterally overrule them.’ De Klerk knew that he had hawks sitting behind him in the cabinet so he said to Madiba, ‘Excuse me for a while and let me consult with my cabinet’ … In the end he concedes to Madiba’s view.

Madiba had succeeded in a space of an hour what we in a space of three months through really most difficult negotiations were not able to succeed in. He turned the whole thing around and played an incredible role, and the next morning of course we saw the release of some of the people from death row – an incredible victory.”

-Hassen Ebrahim, then National Coordinator of the ANC Negotiations Commission describing Mandela’s call to De Klerk the night before
the summit

“Finally … Common understanding has been reached today in the joint Record of Understanding that we need to move with all urgency towards an interim government of national unity and a democratically elected constituent assembly. It is only the achievement of these goals that will finally bring lasting peace to this blood-soaked land. The points of agreement outlined in the Record of Understanding constitute an important step forward toward breaking the CODESA 2 deadlock.

It is the duty now of all South Africans to ensure that our efforts today and the sacrifices of so many are not in vain. Let us move forward with courage, honesty and determination to build upon and consolidate the basis laid at today`s summit to create a peaceful, just and democratic South Africa.”

–Press statement by Nelson Mandela after the Summit at the World Trade Centre, 26 September 1992, Johannesburg

“The period between the break-up of CODESA 2 and the Record of Understanding was crucial in the constitutional process. In this period, the ANC was devoted to making the country ungovernable … They were anxious to save face because they failed – what they threatened did not materialise and so they returned to the negotiating table.”

“The very reason we wanted a Constitutional Court was to certify the constitution. It was central to the whole idea of the two-stage process of constitution-making.”

–Albie Sachs, then member of the ANC’s Constitutional Committee and negotiator at CODESA

“This is the point at which De Klerk actually acknowledges that … he can only move into the future through some understanding and relationship with the ANC.”

-Mac Maharaj, then member of the ANC’s National Executive Committee and ANC negotiator at CODESA

“The Nats and the ANC … Were seemingly engaged in a parallel process that would, in fact, determine both substantive and procedural matters on a bilateral basis and on the basis of private arrangements.”

–Peter Smith, then strategist for the IFP

“Immediately, once that Record of Understanding was signed between [Nelson] Mandela and De Klerk, the IFP turned everything on us, on both sides, and said, ‘You excluded us. We’ll walk away. We’re not going to participate in multi-party talks.’”

-Roelf Meyer, then Minister of Constitutional Affairs and lead negotiator at CODESA

-Hassen Ebrahim, then National Coordinator of the ANC Negotiations Commission

“The big breakthrough came with the Record of Understanding. It accepted the two-stage process and did away with the notion of power-sharing.”

–Albie Sachs, then member of the ANC’s Constitutional Committee and negotiator at CODESA

-Nelson Mandela, then President of the ANC

“The channels of communication are open again.”

C1010Report Preliminary Inquiry Into The Bisho Incident On 7 September 1992.
Menu