The story of the invasion of the World Trade Centre 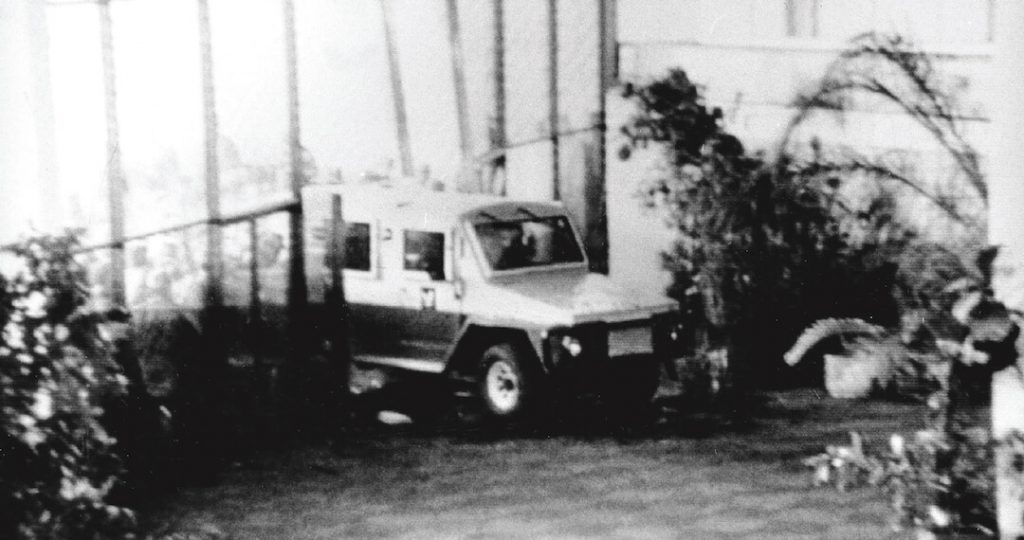 By June 1993, the MPNP had reached an agreement on some of the key mechanisms for managing the democratic elections. Once again, however, the talks ran into trouble when the AWB violently invaded the World Trade Centre. The AWB members demanded that the government should immediately remove the ‘communist menace’, referring to the ANC and its alliance with the SACP. 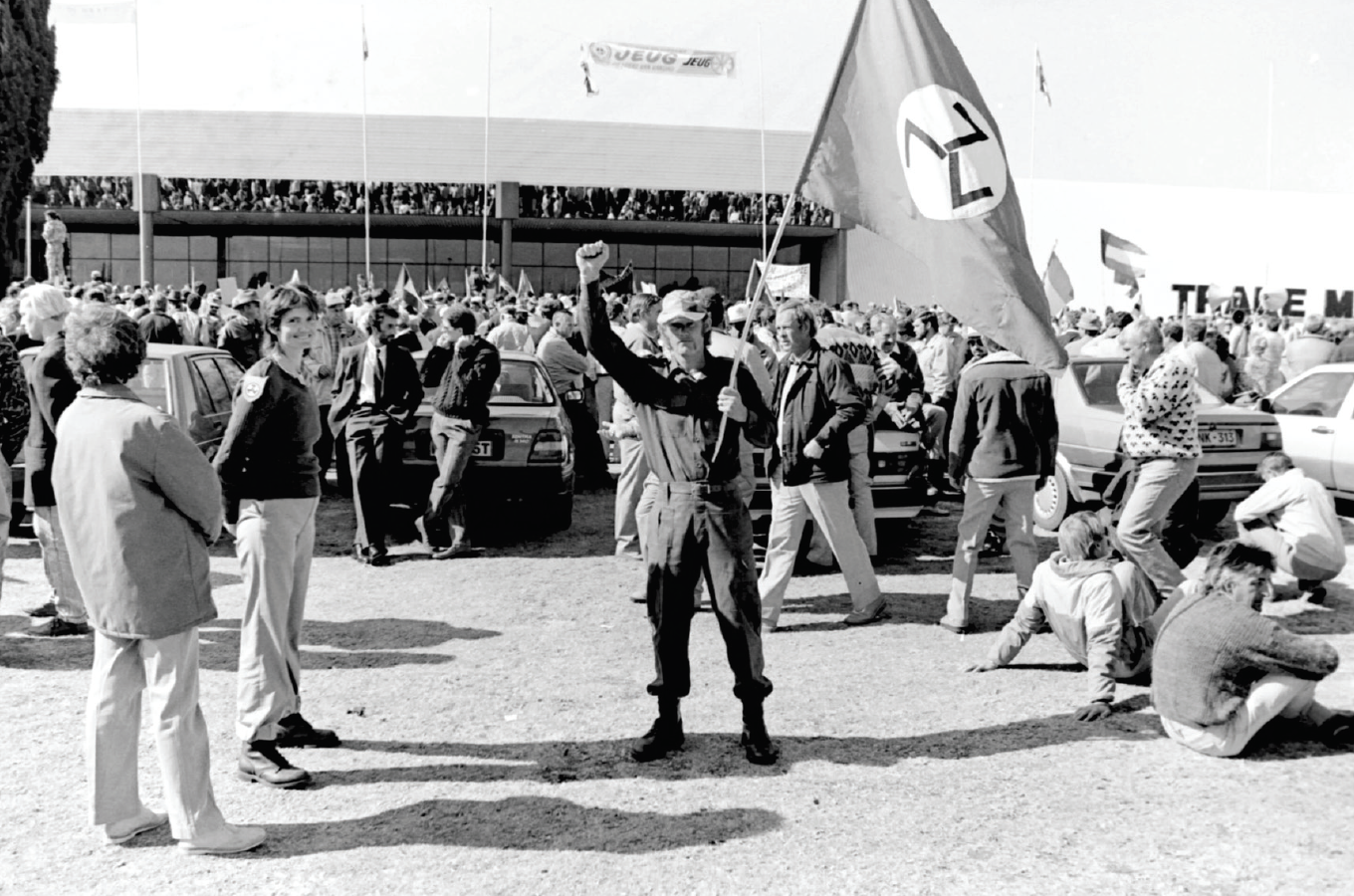 AWB members invading the World Trade Centre, one of whom is holding an AWB flag aloft, 25 June 1993. Robert Botha

The Negotiating Council, the highest decision-making body of the MPNP, passed a resolution expressing its outrage at the invasion of the World Trade Centre. It resolved to ensure that the negotiating process was ‘not derailed or disrupted’ and to ‘accelerate the process of negotiations to bring about a democratic constitution’. It insisted that the perpetrators of the events be prosecuted immediately. The World Trade Centre became a fortress in the wake of the AWB attack. 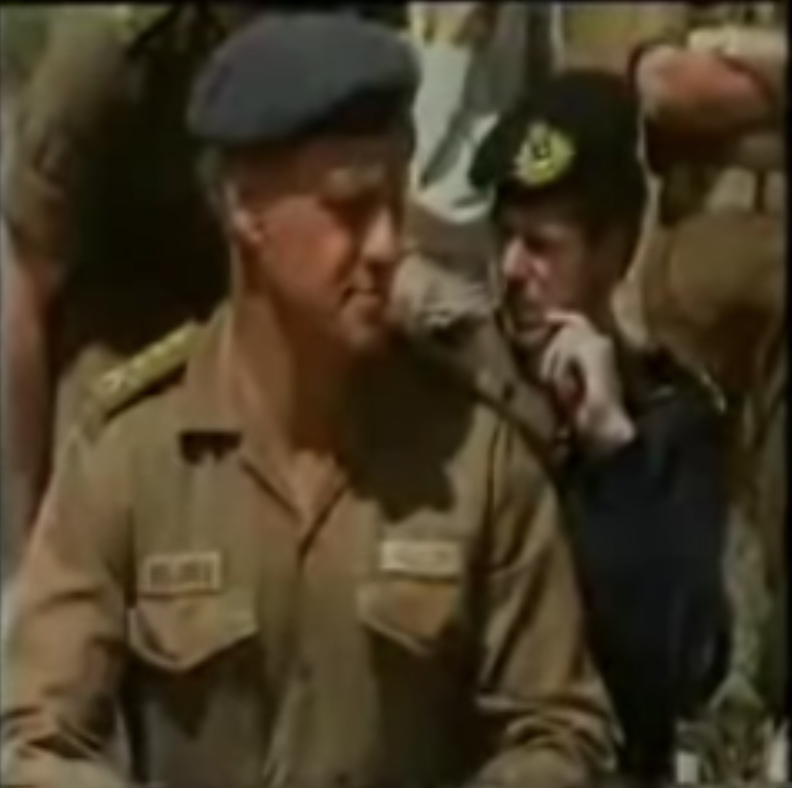 On 13 July 1993, the Commission released a damning report on the AWB invasion of the MPNP. It outlined how Captain Engelbrecht attempted to prevent the Viper (truck) from smashing into the glass front but was unsuccessful because he was assaulted by two members of the ‘Ystergarde’, the elite armed corp of the AWB. Sixty members of the AWB were charged. 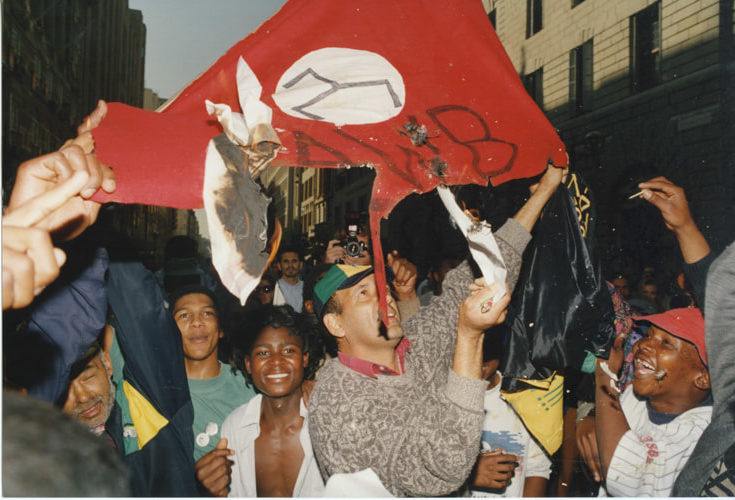 A mock AWB flag is burnt by demonstrators protesting against the right-wing storming of the democratic negotiations at the World Trade Centre. Benny Gool

Just a month later, on 25 July 1993, five members of the PAC’s military wing, Azanian People’s Liberation Army (APLA), entered St James Church in Cape Town and opened fire on the congregation. Twelve people died and 56 were injured. APLA members later bombed the Heidelberg Tavern in Observatory, killing four people. APLA Chief Commander Sabelo Phama had declared 1993 ‘The Year of the Great Storm’, and said in an SABC interview that he would “aim his guns to hurt whites where it hurts most”. Later, at the TRC, there were extraordinary scenes of Christian forgiveness. 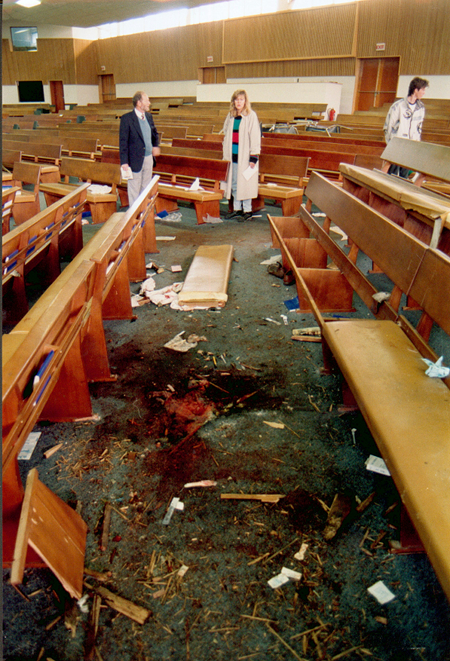 Investigator at the scene of the St James shooting by the PAC. Unknown 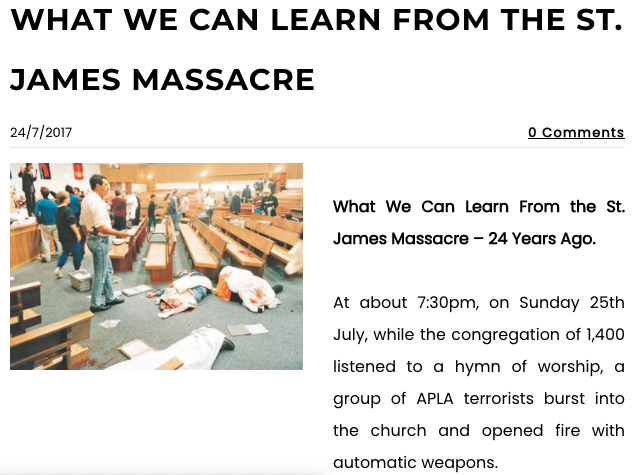 What we can learn from the St James Massacre. 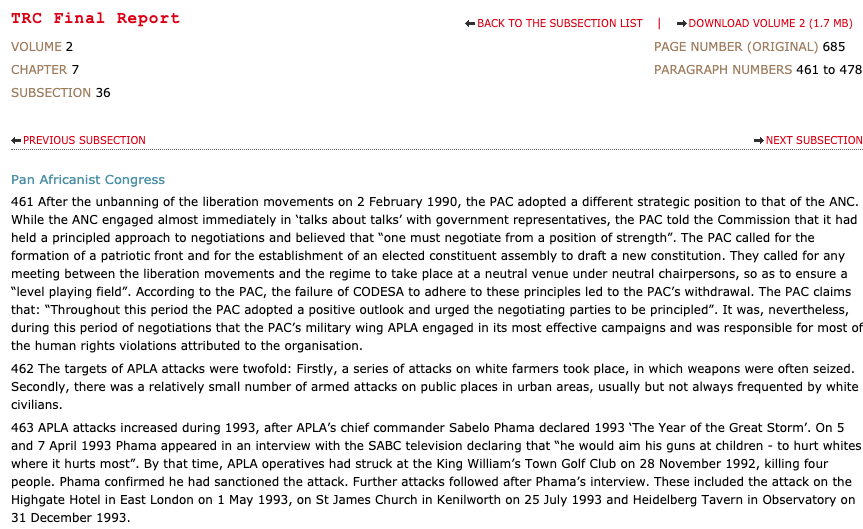 The TRC Amnesty report on the APLA hearings. 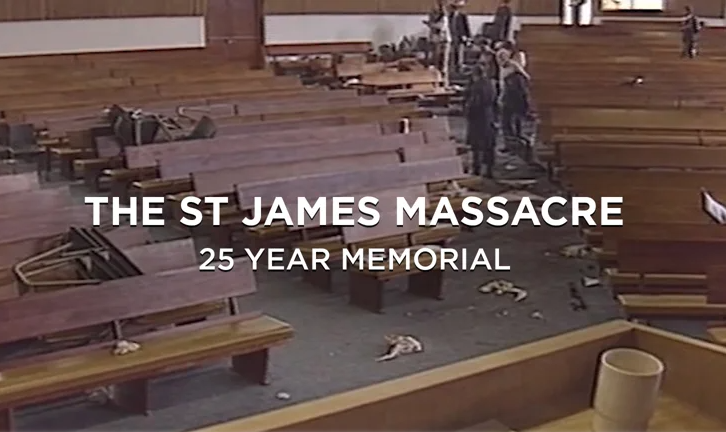 This documentary film explores the events of the killing as well as the reaction of the congregation that was witnessed around the world. Director: Michael Klein, Producers: Nicki Priem, Liesel Priem

Although shocking and difficult, these two events served to deepen the commitment of the main political parties to negotiations. With the urgency of the situation becoming increasingly evident, the MPNP plenary finally ratified the election date.

“The ANC is not interested in sharing power and will never safeguard the minority groups. They’re after the whole of South Africa to use it as a communist satellite. This is the beginning of protest. We don’t want war, but we don’t want peace under the heel of communism.”

-Eugène Terre’Blanche, then leader of the AWB

“With the constitutional negotiations picking up speed, the AWB together with other Afrikaner groupings felt isolated and excluded from the process. They wanted to show the world that the voices of many Afrikaners were not heard during the negotiations.”

–Leon Wessels, then Cabinet Minister and NP representative at the MPNP

“My people, the Afrikaner volk, really have a right according to international law, to demand some part of this land as their own. You have a place where a Brit can be British, I must have land where the Afrikaner, the Boer, can be a Boer.”

-Eugène Terre’Blanche, then leader of the AWB

“For a couple of hours, the neo-fascist AWB took over the building. During their occupation … They manifested the worst of hooliganism and naked racism. The incident demonstrated just how boorish and repulsive the far-right really were. All decent Afrikaners, including those on the right, like General Viljoen, were ashamed to be associated in any way with these thugs.”

“We resolve to ensure that with all the resources at our command, that this negotiations process is not derailed or disrupted.”

“Any suggestion of calling off negotiations would be playing into the hands of the murderers whose purpose is to stop the process. We must defeat them.”

–Joe Slovo, then member of the SACP and ANC negotiator at the MPNP

“General Constand Viljoen was forced to eat humble pie. We twice found him in the company of the AWB – once willingly and on another occasion unwillingly. On both occasions, the AWB’s undisciplined conduct embarrassed him. When the AWB ‘invaded’ the negotiations precinct Viljoen was in their ranks. They besmirched his good name.”

-Leon Wessels, then Cabinet Minister and NP negotiator at the MPNP

“From then on the venue became a no-go zone. Security guards, checkpoints, passes and razor wire turned [the World Trade Centre] into a modern fortress. But fortress or not, within its rooms the mood was still conducive to progress.”

–Mike Nicol, author of The Making of the Constitution 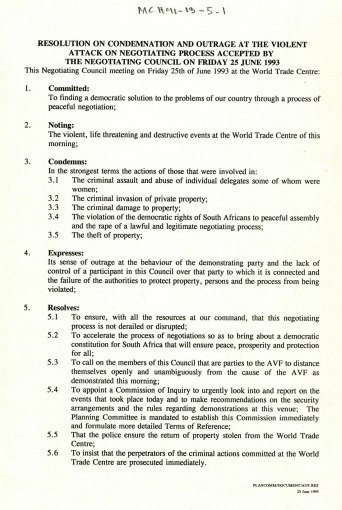 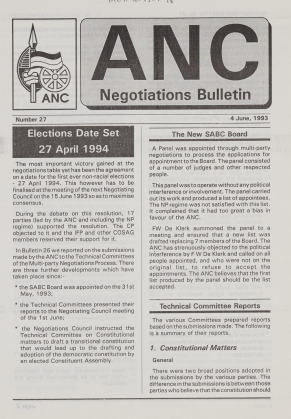 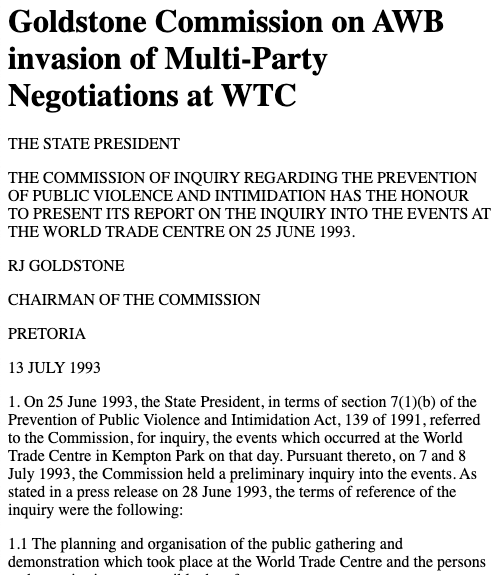