Secret talks between Prisoner 46/664 and the government 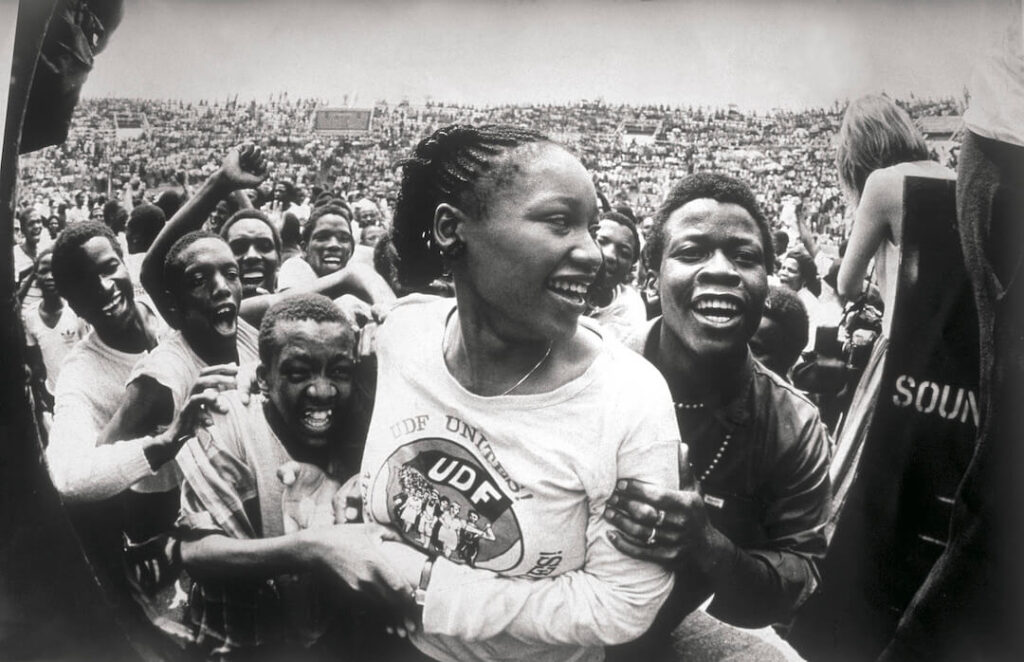 UDF rally in Soweto where Zindzi Mandela read out the statement from her father, 1985. Alf Kumalo / Alf Kumalo Family Trust

When Mandela was hospitalised at the Volks Hospital in Cape Town for a prostate operation, Kobie Coetsee, the Minister of Justice, paid Mandela a surprise visit. Several other informal top-secret meetings followed, creating a tenuous channel of communication between Mandela and the government.

“That morning Kobie Coetsee dropped by the hospital unannounced … Though I acted as though this was the most normal thing in the world, I was amazed. The government, in its slow and tentative way, was reckoning that they had to come to some accommodation with the ANC. Coetsee’s visit was an olive branch.”

–Nelson Mandela, then Prisoner 46/664, from his autobiography Long Walk
to Freedom

“Nelson was worried that news of his meeting with Kobie Coetsee might get out and reach the ANC leadership in exile, and that they might think he was doing deals without their concurrence. He asked me to try to get to Oliver Tambo in Lusaka and assure him that nothing would happen without their approval.” 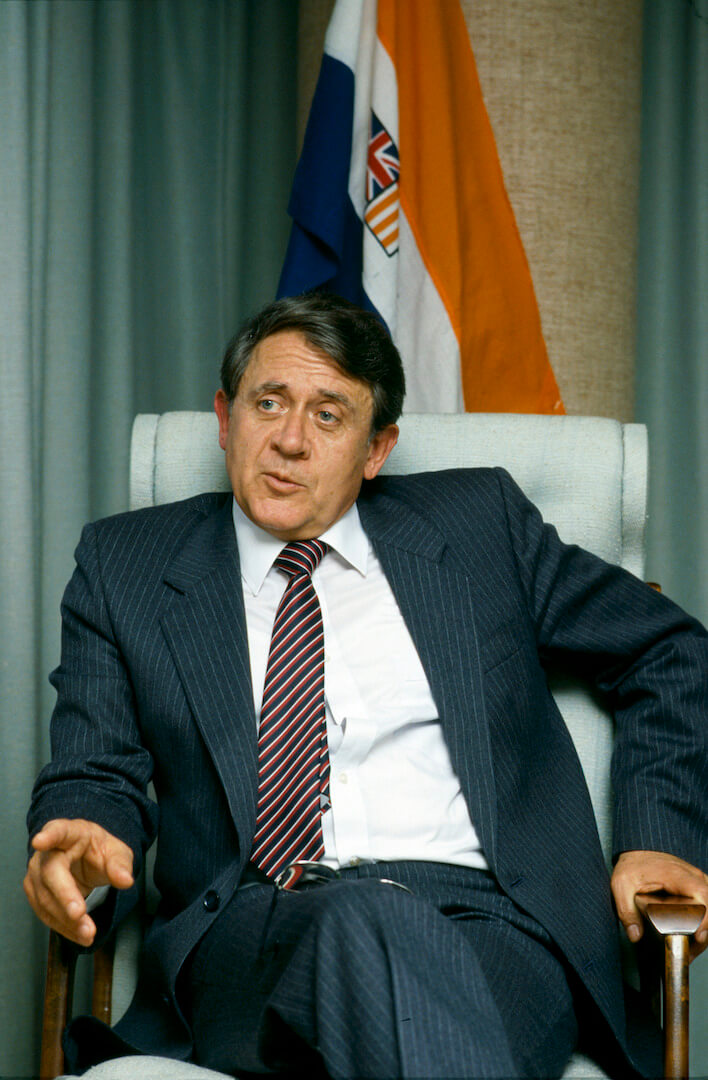 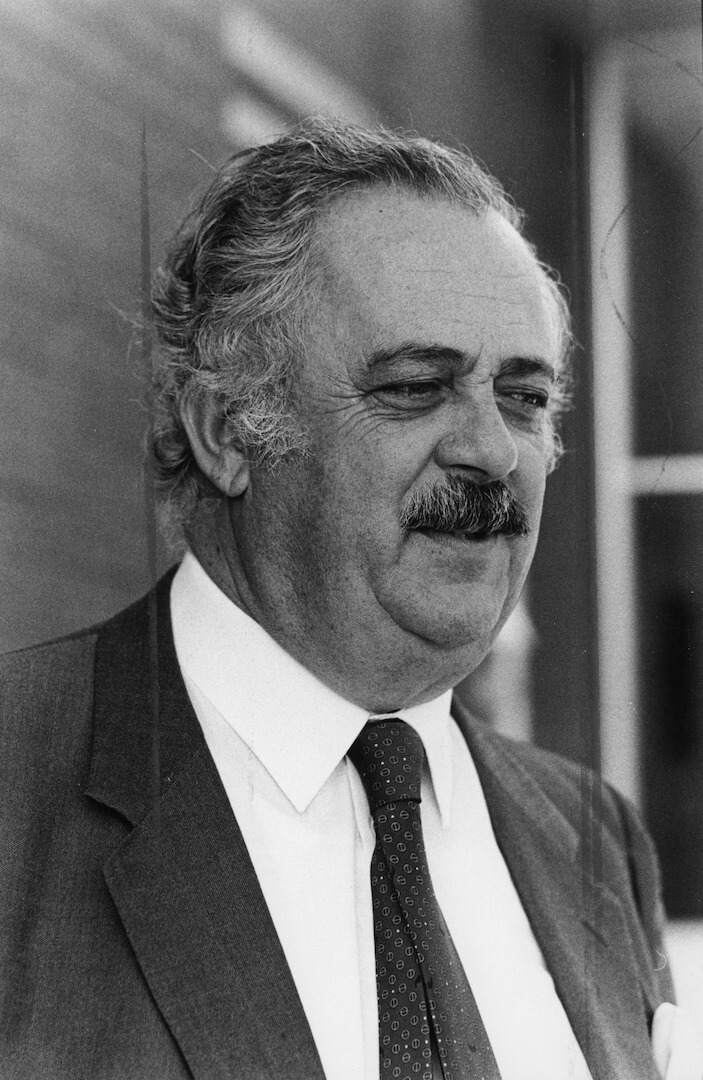 These meetings led to the government permitting Mandela to meet with the EPG in February 1986 to explore the potential for dialogue. (The EPG included seven leaders from the British Commonwealth who arrived in South Africa to examine the prospects for working towards democracy.) There was, however, a setback to the process when the apartheid government ordered airstrikes on ANC bases in Zambia, Zimbabwe, and Botswana and Botha imposed a national State of Emergency. The EPG left South Africa and initiated comprehensive economic sanctions against the apartheid state. The promise of negotiations was postponed. 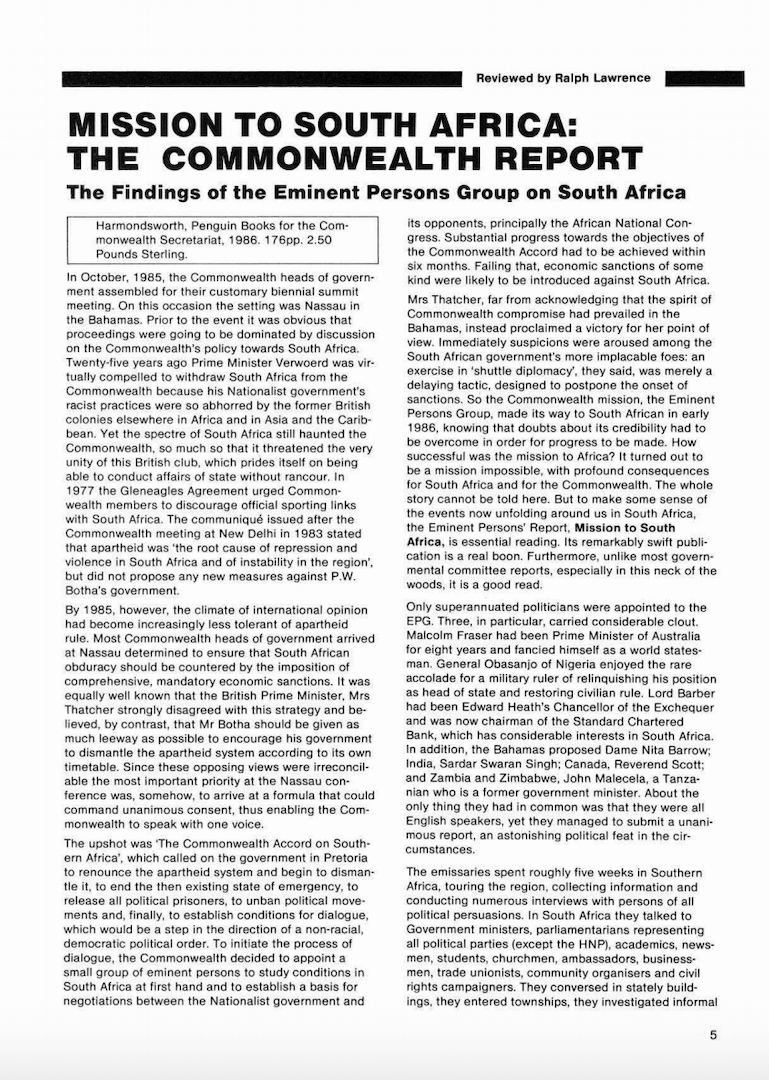 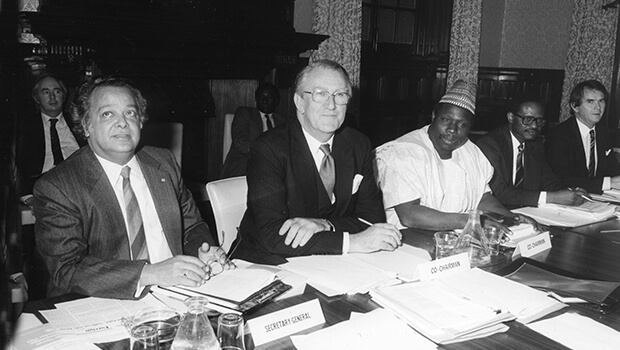 Mandela had contact with the outside world through his lawyers, George Bizos and Ismail Ayob, who in turn communicated with the ANC-in-exile. The second was that the regime permitted communication even over the telephone with Lusaka, although his conversations were listened to. The third was secret communication directed by Mac Maharaj who organised clandestine messages in which early access on the web played a big role. 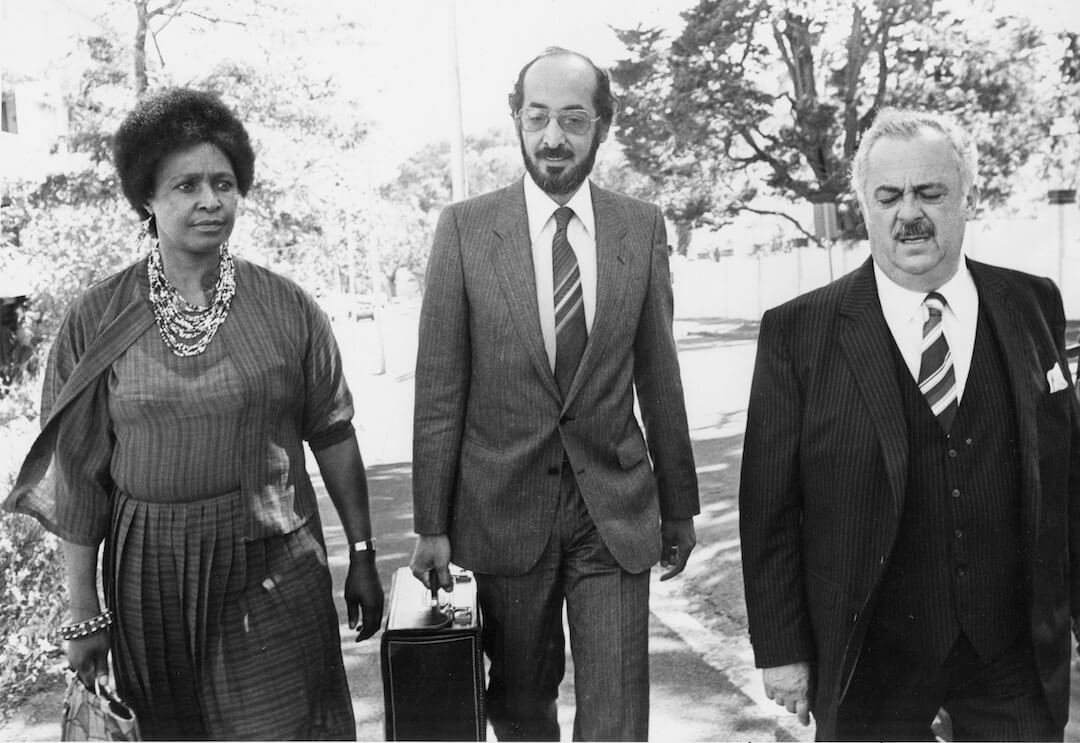 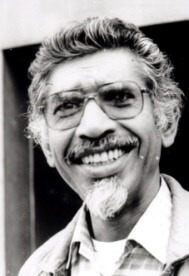 It took another three years before Mandela could rekindle his process of secret talks with the government, this time with a team of officials headed by Barnard – the intelligence chief. They met with Mandela on a weekly basis in order to understand, in Barnard’s words, ‘how Mr Mandela’s head worked’. A topic of discussion was whether Mandela would support the protection of minority group rights in a future constitutional dispensation. The meetings also unofficially prepared the ‘Old Man’, as the government called Mandela, for his release. 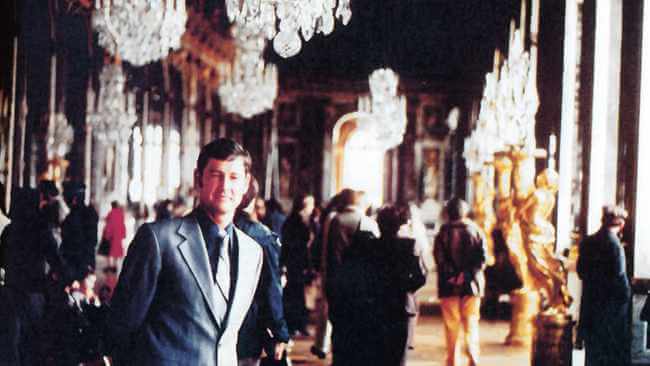 Niël Barnard in the Hall of Mirrors at Versailles outside Paris, France, shortly after his appointment as head of the National Intelligence Service. He was on an overseas tour to meet some of his peers. Niel Barnard

Finally, in July 1989, Mandela secretly met with Botha at Tuynhuys, Cape Town. Mandela made it quite clear that in the normal course of events, he would first have consulted with the ANC. Besides the suit that was made for Mandela, he was also presented with a shirt, tie, shoes, and underwear for this meeting. This was his second set of clothing – he had first received a suit for his meeting with the Commonwealth Eminent Persons Group (EPG) in 1986. In the meeting, Mandela urged Botha to release his comrade and lifelong companion, Walter Sisulu, along with the other Rivonia Trialists whilst making it clear that he was not negotiating on behalf of the ANC. 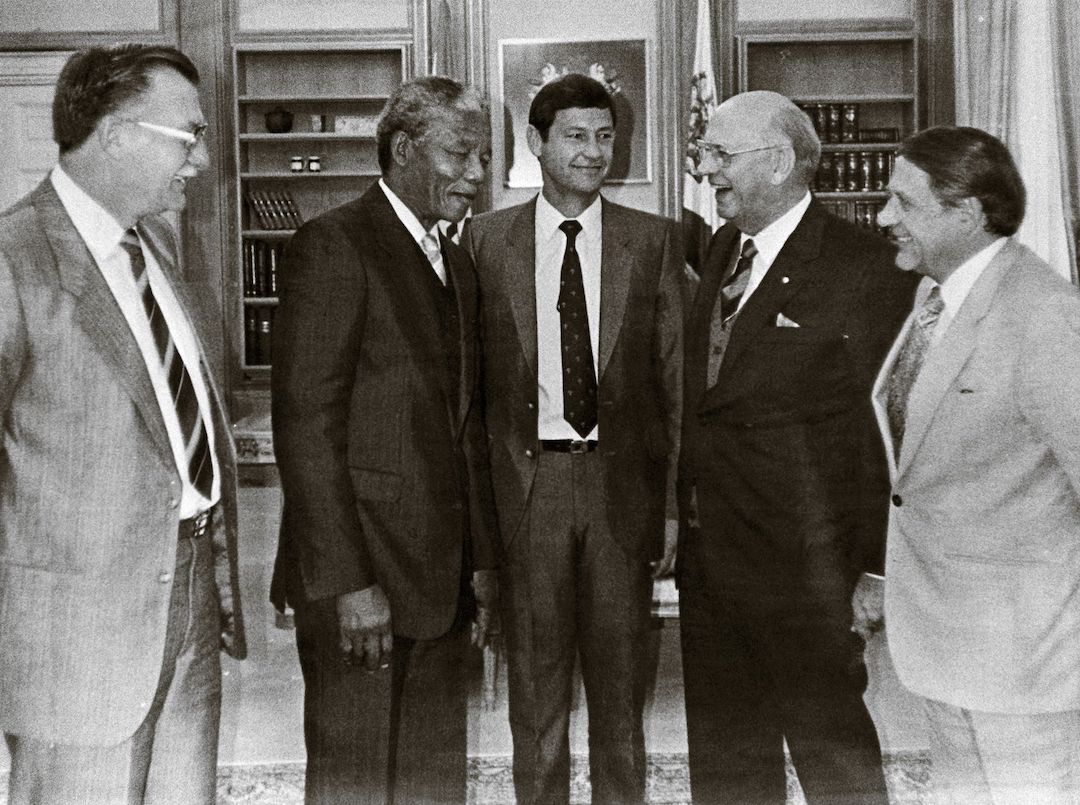 “The meeting [between Mandela and PW Botha] was not even an hour long and was friendly and breezy until the end. It was then that I raised a serious issue. I asked Mr. Botha to unconditionally release all political prisoners, including myself. That was the only tense moment in the meeting, and Mr. Botha said that he was afraid that he could not do that.”

–Nelson Mandela, then Prisoner 46/664, from his autobiography Long Walk to Freedom

“I was so struck by his [Mandela’s] presence. It was absolutely remarkable – his alertness, his composure, his bearing, the way he met these people as though he had been a pinstriped leader all his life. That was a crucial impression for me. I think that was the day I realised this could be the man that would become the President.”

–Kobie Coetsee, then Minister of Justice

“We just have to realise fully what we are in for when we begin to negotiate with Nelson Mandela. The eventual outcome is inevitable and will be a majority government, with him as the President.”

“There were three stumbling blocks in the way of a political agreement: the ANC’s use of violence; the influence of the Communist Party within the ANC, and fears about the abuse of power and the constitutional guarantees that would be necessary to allay these fears … The plan was to get Mandela talking so we could get a sense of his thinking and what his plan of action was.”

–Dr Niël Barnard, then Head of the National Intelligence Service, from his biography, Secret Revolution

“I don’t think for the life of me that the regime’s intention of talking to Mandela had the best of motives. They thought that they could actually capture and neutralise a person who was in their jail and isolate him from Oliver Tambo.”

-Penuell Maduna, then member of the ANC Constitutional Committee

“The step I am taking should not be seen as the beginning of actual negotiations between the government and the ANC. My task is a very limited one, and that is to bring the country’s two major political bodies to the negotiating table.”

–From the ‘Mandela Document’ which Nelson Mandela, then prisoner 46/664, prepared for then President PW Botha ahead of the meeting

“I asked Mandela how he felt when he went to see PW Botha. He said, ‘I was determined about two things. First, I was determined he would not treat me the way he treated some of the other African leaders that he had met. Second, I was not going to negotiate, he had to negotiate with the ANC.’ He [Mandela] was disarmed by PW Botha, because when he got there PW Botha stood up, greeted him, made him sit down and poured tea for him. PW treated him with respect. But Mandela did make clear – negotiate with the ANC and
not
with me.”

-Frene Ginwala, then head of the Political Research Unit in the Office of ANC President Oliver Tambo, and ANC spokesperson in the United Kingdom 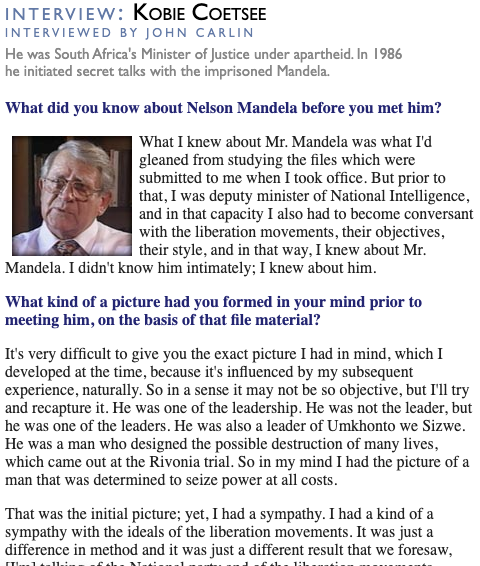 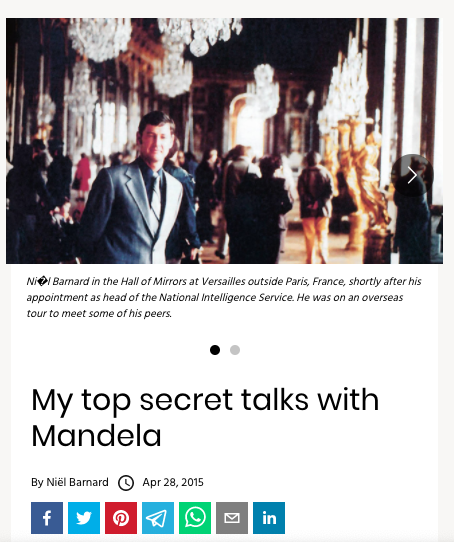 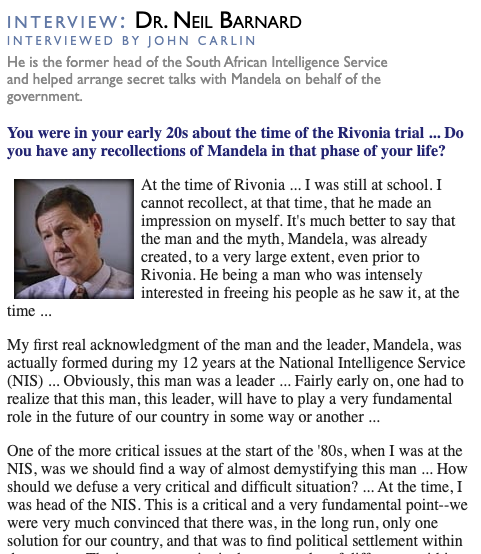 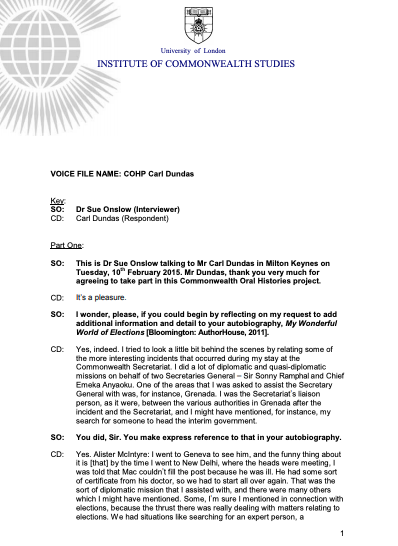