Events leading to the suspension of talks 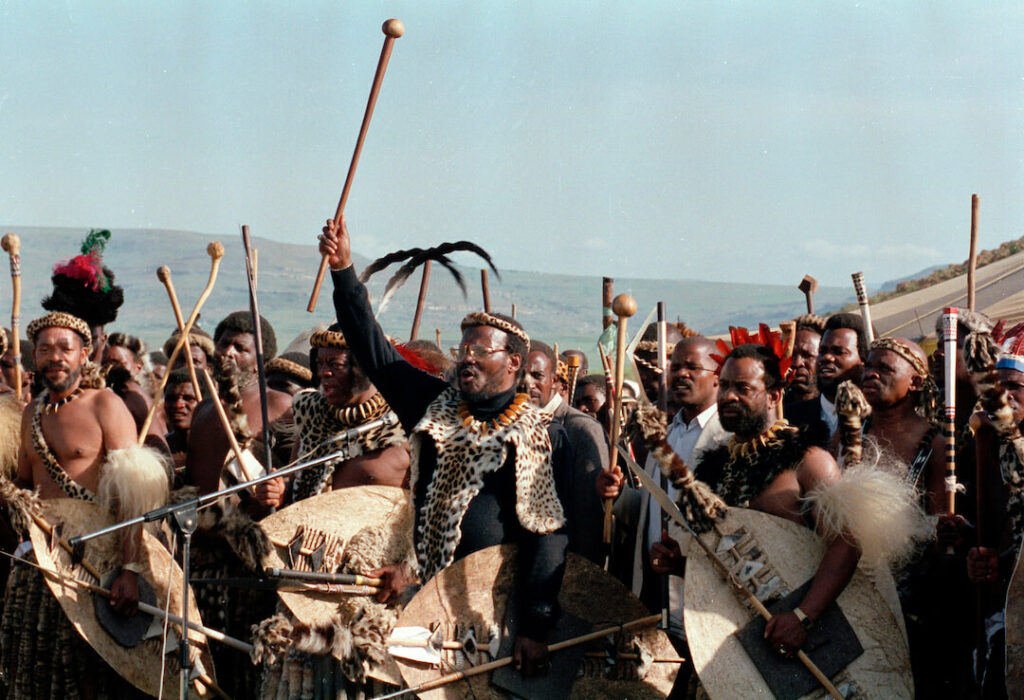 Brian Morrow, a former warrant officer in the security branch, revealed documents, some marked ‘top secret’, which showed that the notorious Security Branch had been making payments into a secret account kept by Buthelezi at a Durban bank. The documents also showed that the security forces were directly involved in the funding of a trade union federation linked with the IFP. De Klerk claimed no knowledge of the support provided by the apartheid state. Buthelezi acknowledged the training, but claimed no knowledge of the funding. 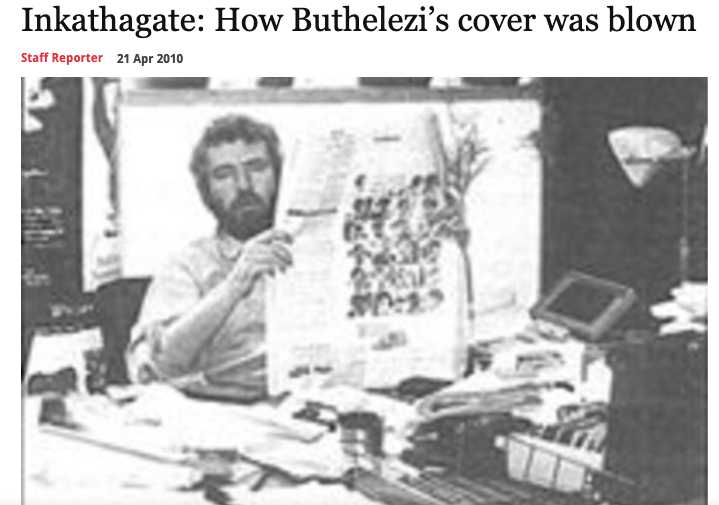 For Cyril Ramaphosa, soon to become Secretary General of the ANC, ‘Inkathagate’ did irreparable damage to both the IFP and the government. It reinforced the ANC’s demands for an interim government and that the IFP should not be allowed to carry ‘dangerous weapons’. De Klerk went into a three-day retreat when the evidence emerged. He accepted the Minister of Law and Order, Adriaan Vlok’s resignation. The General Secretary of the IFP resigned in an attempt to insulate Buthelezi from being tainted.

Revelations about police involvement in death squads further undermined the government’s standing. The ANC again accused De Klerk of having a double agenda. De Klerk refuted this accusation, and went on to promise ‘relentless action’ against any members of the security services who assisted the IFP or any other movement to perpetrate violence. He extended a personal invitation to people to come forward with concrete evidence of security force involvement in violence. 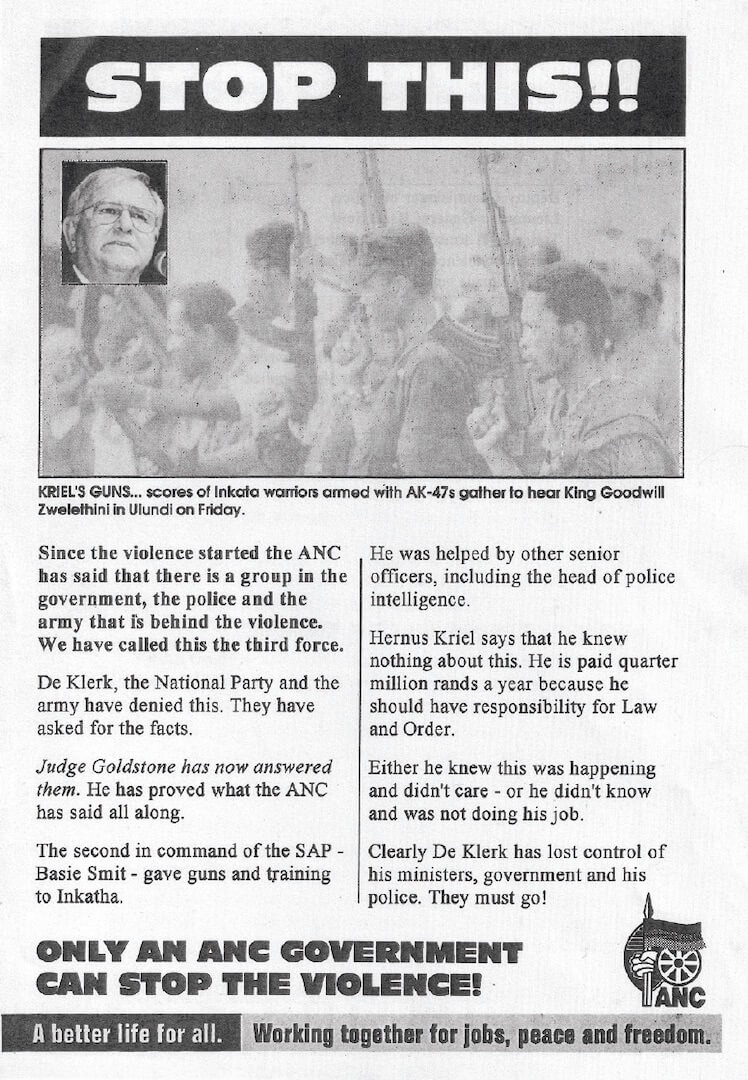 The suspension
of talks:

The ANC remained unconvinced about the NP’s sincerity, and accused De Klerk of shielding senior officers in the SADF – including the infamous death squad unit stationed at Vlakplaas. The ANC suspended all bilateral meetings with the government. Talks about talks were off.

In the meantime, the ANC held its first annual conference inside South Africa in 30 years. Mandela was elected President and Ramaphosa Gecretary-General. The most important task that the conference identified was to transform the ANC from an illegal underground liberation movement into a legal mass political party. The ANC committed itself to continuing the struggle while negotiating the government out of power.

On 24 October 1991, De Klerk appointed a Commission of Inquiry to investigate political violence and intimidation, chaired by Richard Goldstone. The Commission submitted 47 reports to De Klerk. It concluded that political violence was indeed fuelled by a ‘Third Force’ supported by the apartheid government. In 1994, it emerged that the NP had provided arms to IFP supporters in an effort to fuel violence during the transition. 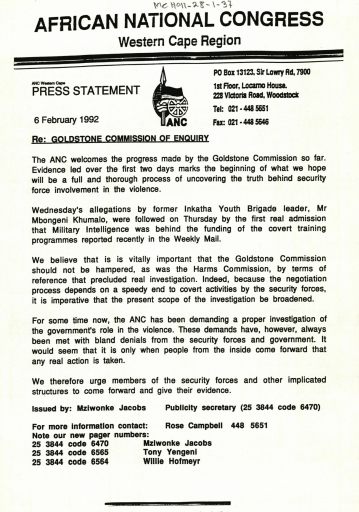 “In early 1988, during a quiet moment in the filing room, I decided to see what one of the cabinets near the ‘White Organisation’ files contained. I was amazed to discover that the security branch was providing financial aid to both Inkatha and their trade union arm UWUSA. Indeed, based on the information outlined in one particular document, the government had virtually created UWUSA.”

“Many times they wanted to assassinate me and those who worked with me in the [KwaZulu] cabinet … And because of that I appealed to the central government for people to protect [us]. And there were those two hundred young people that were actually trained by the South African Defense Force for us. Because I was a sovereign citizen, I was entitled to protection by the South African government – nothing hanky-panky about it.”

–Mangosuthu Buthelezi, then leader of the IFP

“The investment which we have all made in working for a peaceful transformation is being seriously squandered. Unless meaningful steps are taken to meet the demands contained in the ANC’s open letter, all future talks will be at risk. And we will all be losers.”

-Joe Slovo, then SACP representative in the ANC negotiations team

“When the ANC first spoke of a Third Force, it was laughed out of court. Yet today, with over 13 000 lives lost, this concept has been recognised by most commentators within South Africa … The partiality of the police, the lack of arrest or conviction, confirm mounting evidence that the violence erupts at points which most weaken the ANC.”

–Nelson Mandela, then President of the ANC, in his address to the OAU,
April 1992

“We had now uncovered significant evidence of the Third Force activity, Inkatha was participating in a number of violent activities associated with the government. There were killing fields, in the midst of these killing fields, could we continue with the negotiations? You could see the integrity of the negotiating partners, specifically the National Party being severely doubted.”

-Hassen Ebrahim, then National Coordinator of the ANC’s
Negotiation’s Commission 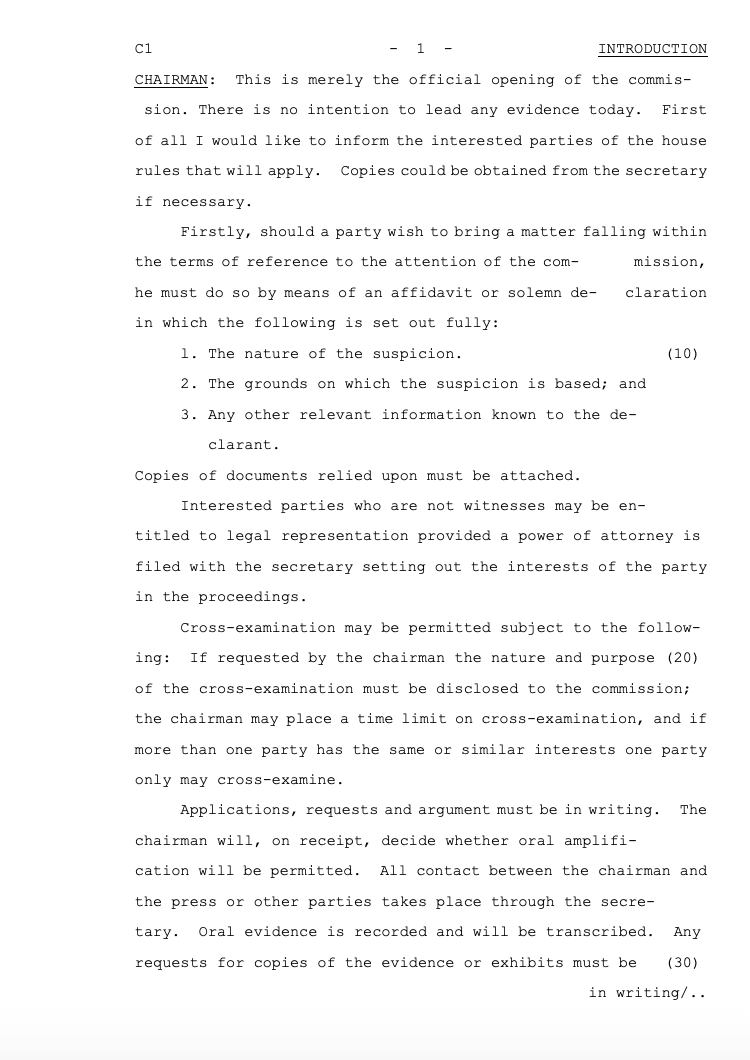 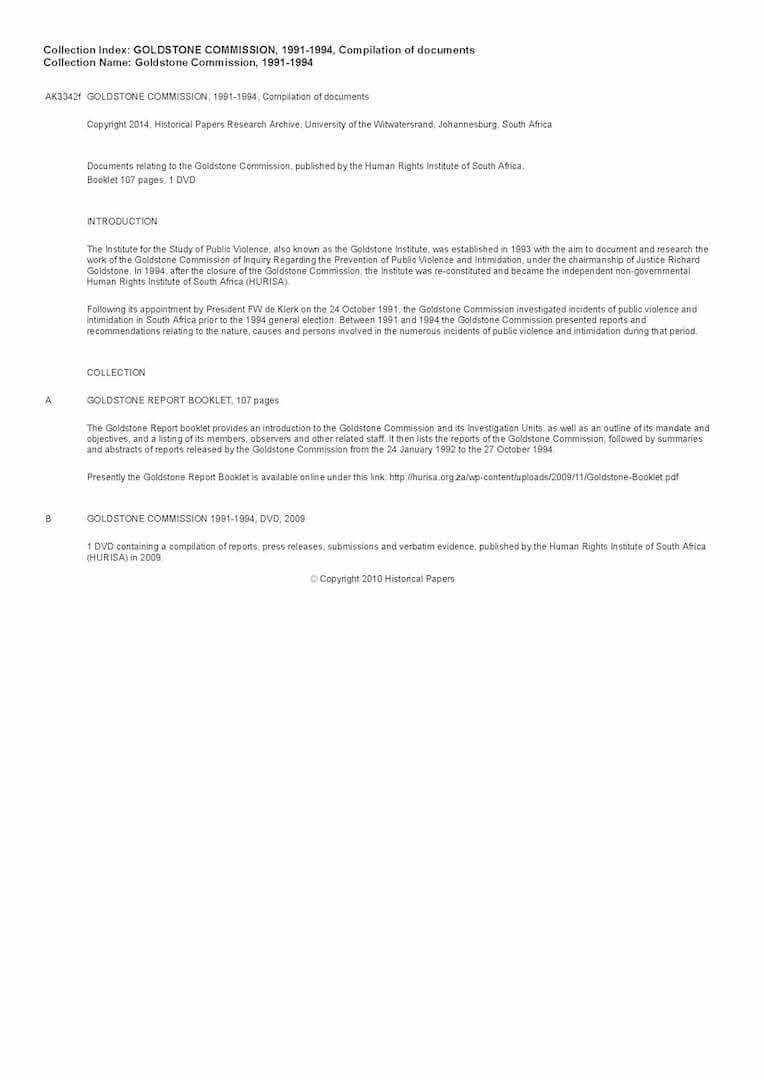 The Goldstone Commission investigated incidents of public violence and intimidation in South Africa before the first democractic elections in 1994. 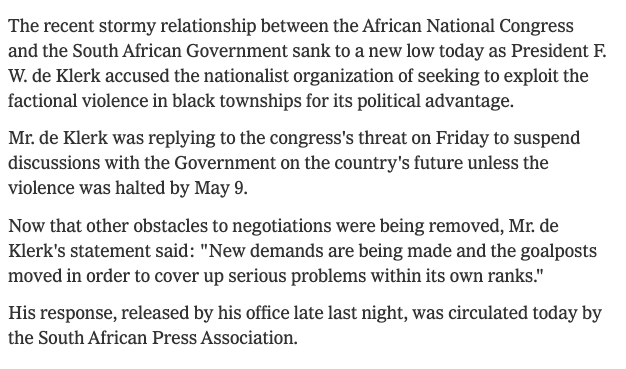 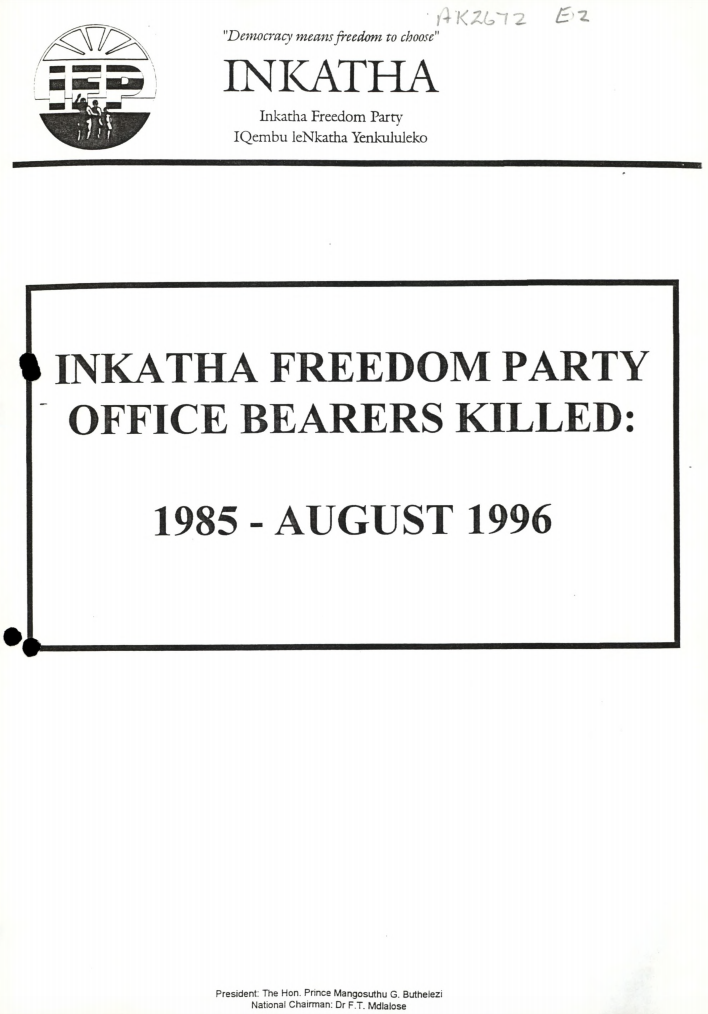 A document from the Goldstone Commission describes violence against members of the IFP, 1985-1996.
Menu