Story behind the call for an All-Party Congress 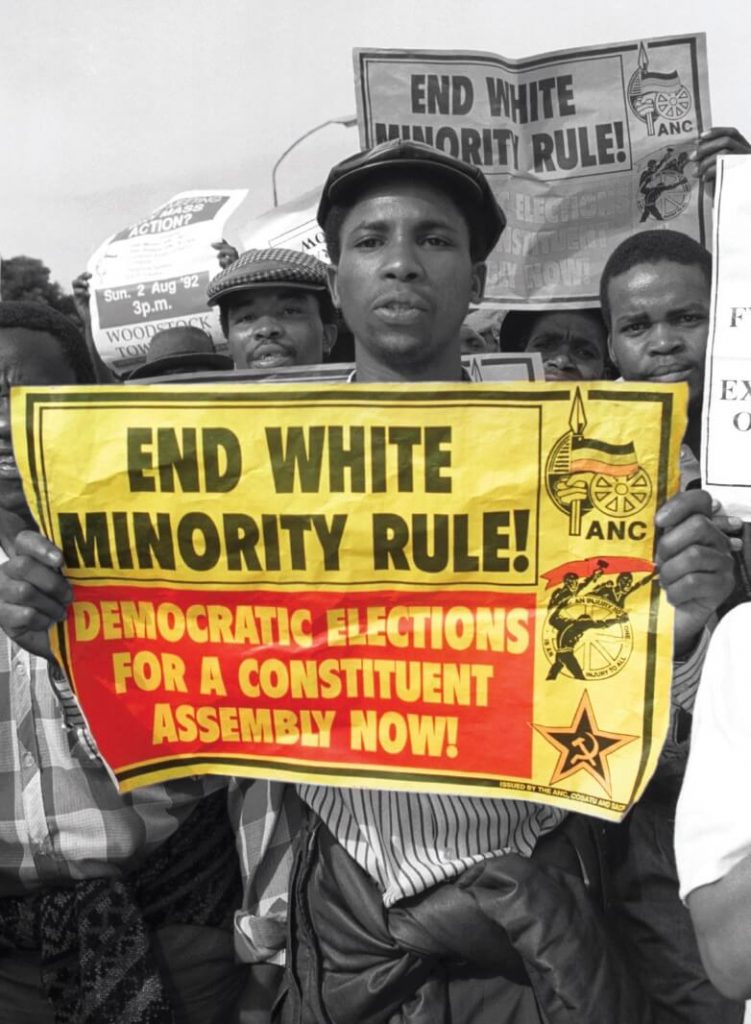 The nature of
the transition:

The government favoured a prolonged process of negotiations during which the constitution would be written. Their hope was of weakening the ANC through a long, drawn out process.

The ANC wanted a short transition that would consume the least amount of time possible and would decide as little as possible about South Africa’s future other than removing the most blatant elements of apartheid. Instead, the ANC wanted the bulk of decisions to be made for a new country after a democratic election. This was both a matter of democratic principle and because the ANC were assured of winning the election. 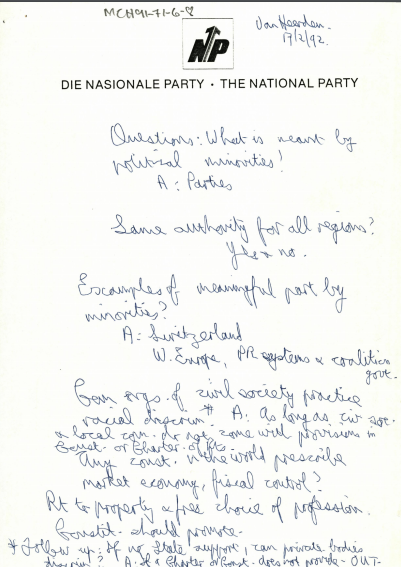 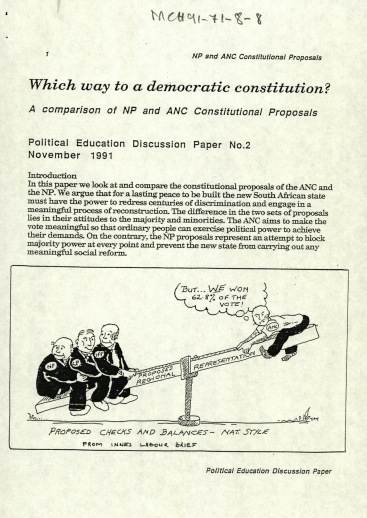 Who should draft
the Constitution?

The NP and other smaller parties wanted the negotiators to draft the constitution and then put it to a referendum for legitimacy. They feared that an elected assembly would lead to majority rule without constitutional safeguards to protect minorities. They objected to what they saw as the ANC “advocating a sudden plunge, virtually without preparation, into simple majoritarianism … To accede to such a demand founded on revolutionary thinking would be irresponsible on the part of the government”.

The bottom line for the ANC was that the people, through elected representatives in the form of a constituent assembly, should write their own constitution. 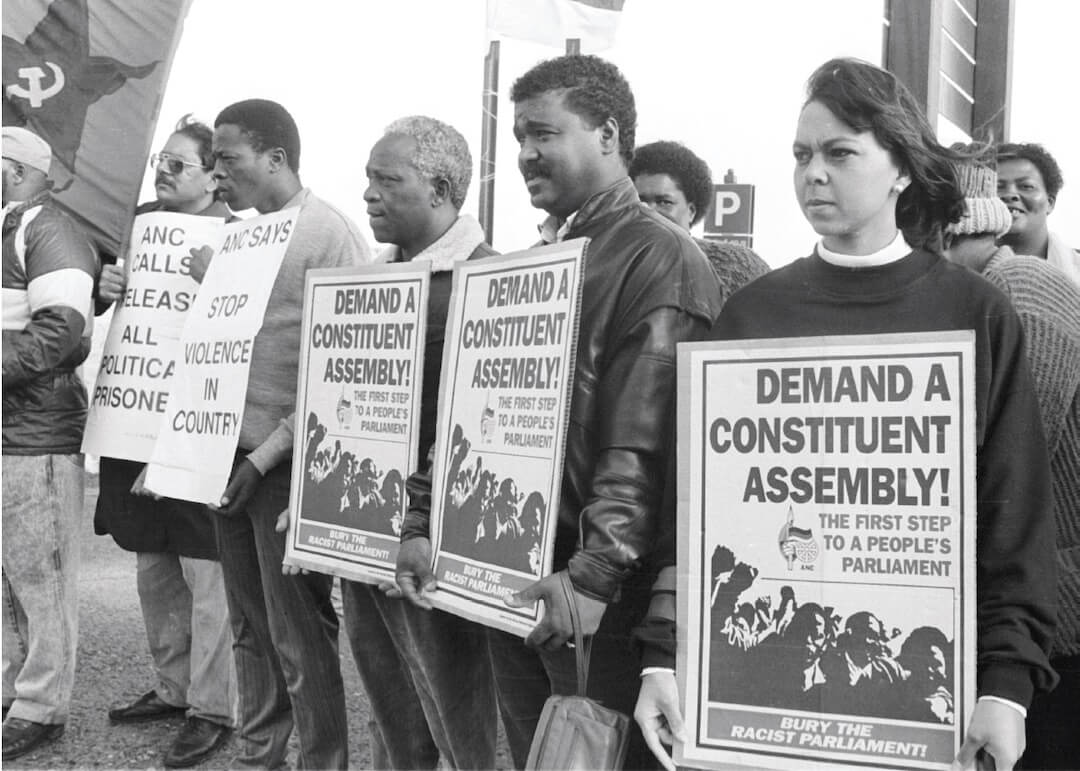 Visions for a future
South Africa:

In the NP’s Constitutional Plan, drafted at four provincial congresses during 1990, the party advocated a system of ‘power sharing’. This entailed a government by consensus amongst the leaders of the different race groups in South Africa. De Klerk called South Africa ‘a nation of minorities’ – each of its ‘ten black tribes’ was an ‘ethnic entity’ as the whites were. No ethnic group constituted a dominant majority, he said. All should therefore rule jointly by consensus decision-making with separate rotating presidents. The plan clung to notions of racial vetoes, protection of minorities, and self-determination for ethnic groups. 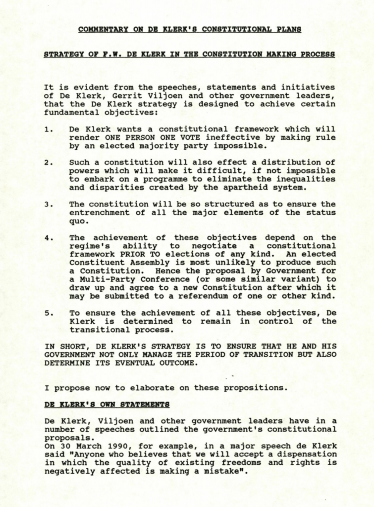 Mandela broke the deadlock around these issues. He suggested that first there should be an All-Party Congress (also referred to as the Multi-Party Conference) and from this would emerge a compromise on the process. This multi-party structure would negotiate an interim constitution and adopt binding Constitutional Principles. The democratic elections would be held and an elected constituent assembly would then negotiate the final Constitution for a new South Africa in accordance with the binding principles laid down by the multi-party congress. 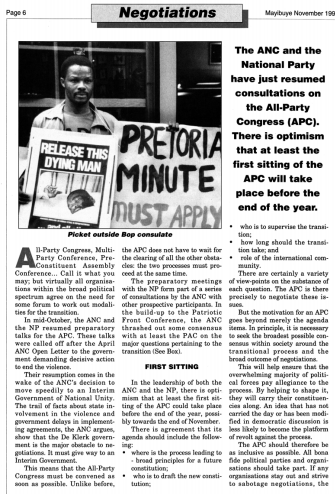 Although the ANC and the NP were the two major contenders for power in the country, the ANC strongly believed that the negotiations would not work if a deal was simply hammered out between the two parties. It was important to bring as many parties on board as possible to participate in the process so that all would feel bound when the Constitution was finally adopted.

“The National Party has said repeatedly that what we reject is [majority rule], that it will lead to the domination of minorities. We stand for power sharing and not for simple, typical majority rule. We are not sell-outs of anyone. We are going to make it safer for our descendants and for the descendants of all South Africans.”

-FW de Klerk, then President of South Africa speaking at the Transvaal Congress of the NP, October 1990

“It is inconceivable that the Nationalists will go to the negotiation table and not insist on some kind of group rights or some kind of built-in safety for the minority.”

–Fatima Meer, then professor of sociology, author and activist

-Nelson Mandela, then Deputy President of the ANC

“We are absolutely adamant that we want an all-party congress to decide on how that interim government makes transitional arrangements and about the basic principles of a constitution without making any guarantees to the NP. The issues are all negotiable. What is non-negotiable for us is that nobody can be a player and referee and take the gate takings.”

–Cheryl Carolus, then member of the ANC negotiating team and the ANC National Executive Committee

“It must be understood that majority rule is neither a necessary guarantee nor a sufficient condition of democracy … The concept of simple majority rule annuls the meaning of the entire negotiation process … It is dangerous and contrary to the facts to ascribe homogeneity to South African society.”

“The structure that [the NP] puts forward … Is neither democratic nor likely to free SA from the legacy of apartheid. It seems to be concerned principally … that the new society should be free from domination … It is only if a majority acts oppressively towards minorities that it is appropriate to talk about domination. What a constitution needs to do is prevent such oppression.”

–Arthur Chaskalson, then advocate and advisor to the ANC Negotiation Commission

“We’re not an illegal government. We are here as a result of a historical fact. And whatever is going to happen will be because we say so.”

“The air is thick with cries allaying the fears of the privileged minority. We hear few appeals for the dominant race to recognise that their privileges were accumulated at the expense of the black deprivation. We can expect De Klerk’s regime to fight tooth and nail to retain the maximum amount of racially accumulated privileges for the white constituency in a new dispensation.”

“In advocating a multi-party process, Nelson Mandela was saying, ‘Take on board everybody, whether they are apartheid puppets or not’, so that we get the maximum unity.”

-Mac Maharaj, then member of the ANC National Executive Committee

“There is a danger that all minorities are subordinated to the will of one majority of society, thereby replacing individual choice and liberty with mob rule.”

–Nigel Cunningham, then member of the Democratic Party

“This moment showed the world that the NP does not want to subject itself to the will of the majority.”

-Valli Moosa, then negotiator for the ANC

“You must be honest with the electorate and say … ‘The majority must govern, the majority will be blacks and you’ll be a minority and you will not be protected’ … So the alternative was to look at maybe more federal systems, maybe a dividing power in a sense.”

“Don’t expect me to negotiate my way out of power.”

“What seems to me to be fundamental is an acceptance by the NP of the fact that if we are truly committed to establishing a democratic form of government, the process by which that government should be established, must also be democratic … If it does, I have great hopes for the future. But if it does not, then I foresee that the negotiating process will be long, difficult and possibly inconclusive, with grave risks for the future of our country.”

–Arthur Chaskalson, then advocate and advisor to the ANC’s Negotiations Commission, 1991

“The call for the constituent assembly should reverberate like a tidal wave through all corners of the land.”

-Joe Slovo- then SACP representative in the ANC negotiations team

“This big wide road that we see in front of us, called transition, has a lot of potholes … On issues of substance, you will find that we will be able to find each other. That we will get a democratic constitution is a fact. But it’s the process that is going to be more difficult.”

–Cyril Ramaphosa, then secretary-general of the ANC 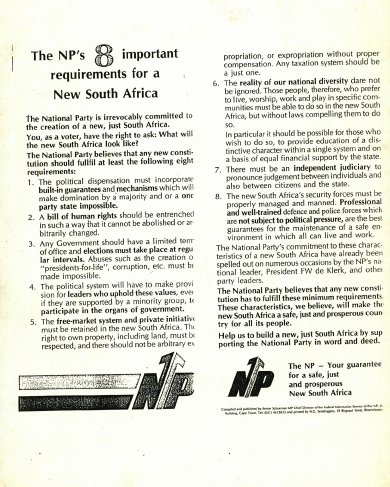 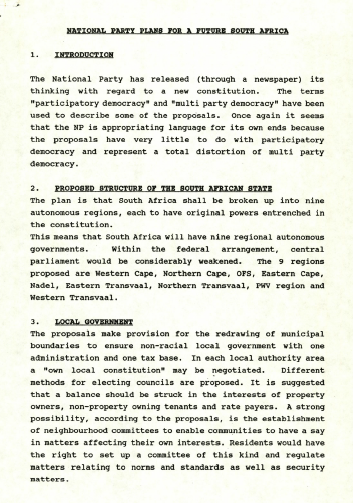 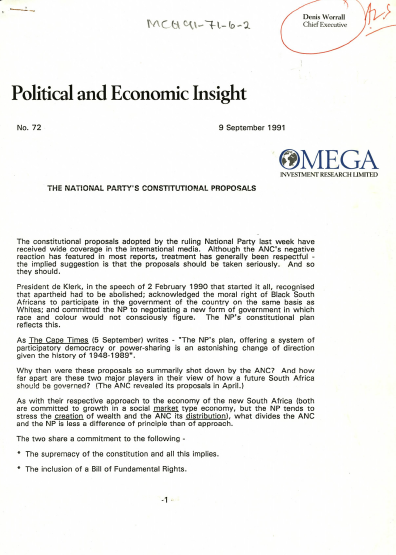