The story of Groote Schuur 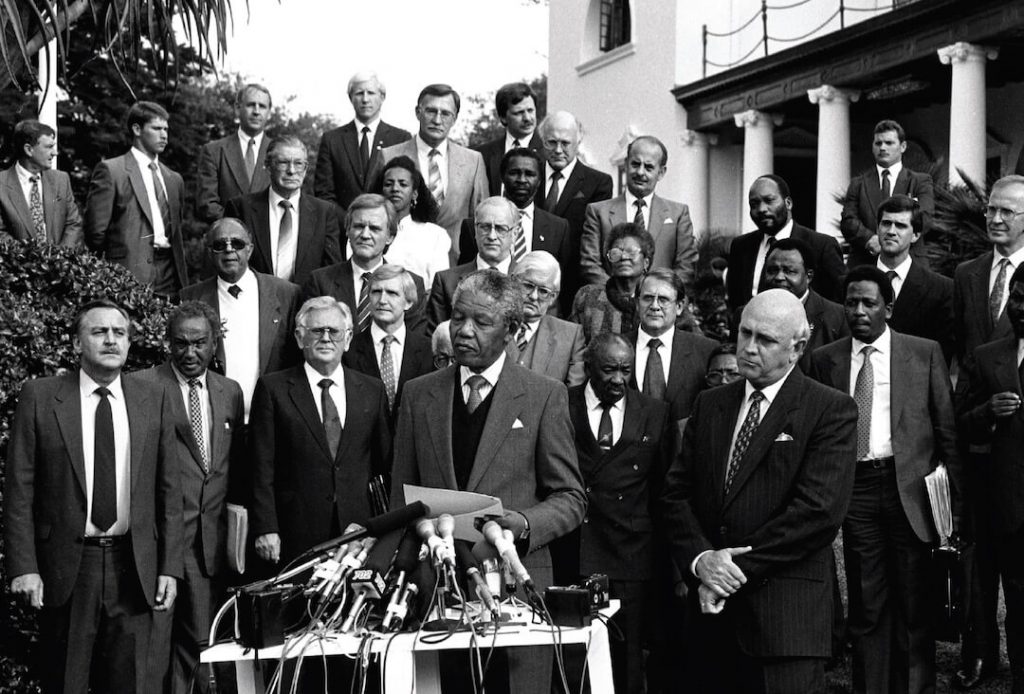 Temporary indemnities – for supposed criminal actions during the years of the anti-apartheid struggle – were granted to the ANC members so that they could safely return from Lusaka to begin negotiations, including Joe Slovo the General Secretary of the South African Communist Party (SACP), and Joe Modise, the Commander of MK. The government provided the security arrangements to the delegation but the ANC members were highly suspicious of being looked after by their erstwhile captors.

On 2 May 1990, the NP and the ANC began a two-day meeting at the historic Groote Schuur estate in Cape Town. It was at this grand former residence of South African heads of government bequeathed by Cecil John Rhodes that the two parties sat across a large dining-room table and identified the obstacles to negotiations – and ways of overcoming them.

The meeting was very tense – both sides were highly suspicious of each other. The ‘talks about talks’ were carried out by leaders with a background in the intelligence service on either side, and there was incredible personal and political mistrust between those gathered. According to Thabo Mbeki, though, it took only a few minutes before “everyone understood that there was no one in the room that had horns”, and they soon got down to work.

The first day started by looking back at history. Mandela explained how the ANC, since its inception, had sought negotiations. De Klerk did not apologise for apartheid, but confessed that the policy of separate development had failed. Both sides then expanded on what they saw as the obstacles to negotiations: the definition of a political prisoner and ‘politically motivated crimes’; the presence of troops in the townships; the State of Emergency; the adherence to the armed struggle; and the need to stem the violence. The second day focused on ensuring that exiled members of the ANC could return to the country, and on deciding on a process of negotiations. 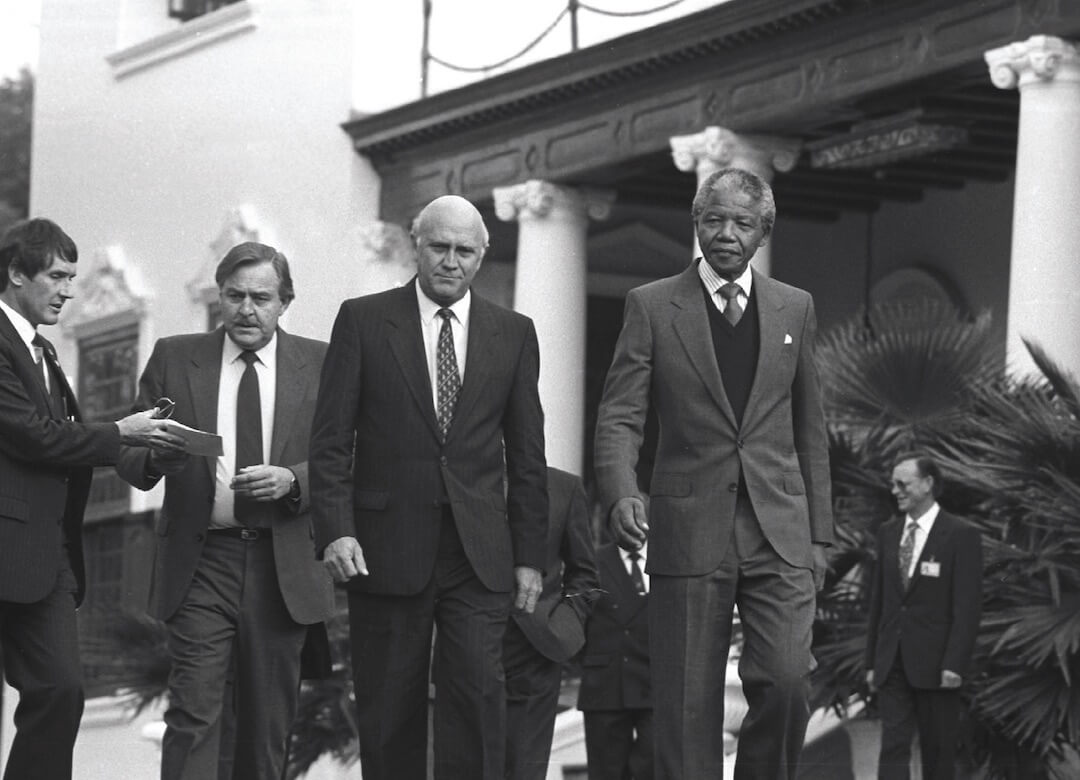 During the meeting, the ANC refused to accede to the NP’s key demand to disband MK, the armed wing of the ANC. De Klerk needed this concession to allay fears in the white community. The two parties were far apart in their vision for South Africa. Although the NP had made important shifts, it still saw the protection of white ‘group’ interests as its core mission and wanted to keep a tight control over the process of transition while arranging forms of power-sharing. The ANC had a clear vision of a united, non-racial society, and a constitution drafted by a constituent assembly. 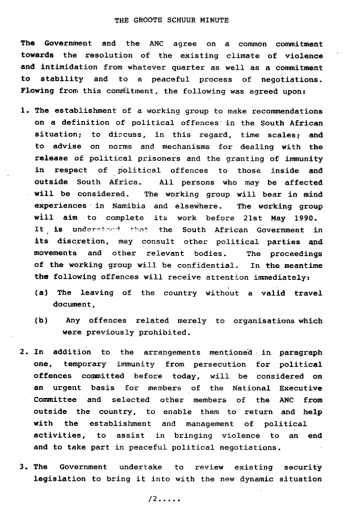 The Groote Schuur Minute shows a commitment towards dealing with the climate of violence and intimidation, and to moving towards negotiations, 2-4 May, 1990. DISA

The third day of the meeting ended with what De Klerk and Mandela described as a ‘broad agreement’ between the parties and the signing of the historic Minute on 4 May 1990. The Minute committed both parties to a peaceful process of negotiations with direct talks on South African soil by South Africans. The government committed to the lifting of the State of Emergency except in the violence-ridden province of Natal. The two leaders stood together in front of a bank of cameras to announce their commitment to a new order in South Africa.

Media from across the globe capture this historic event. Benny Gool / Oryx Archives 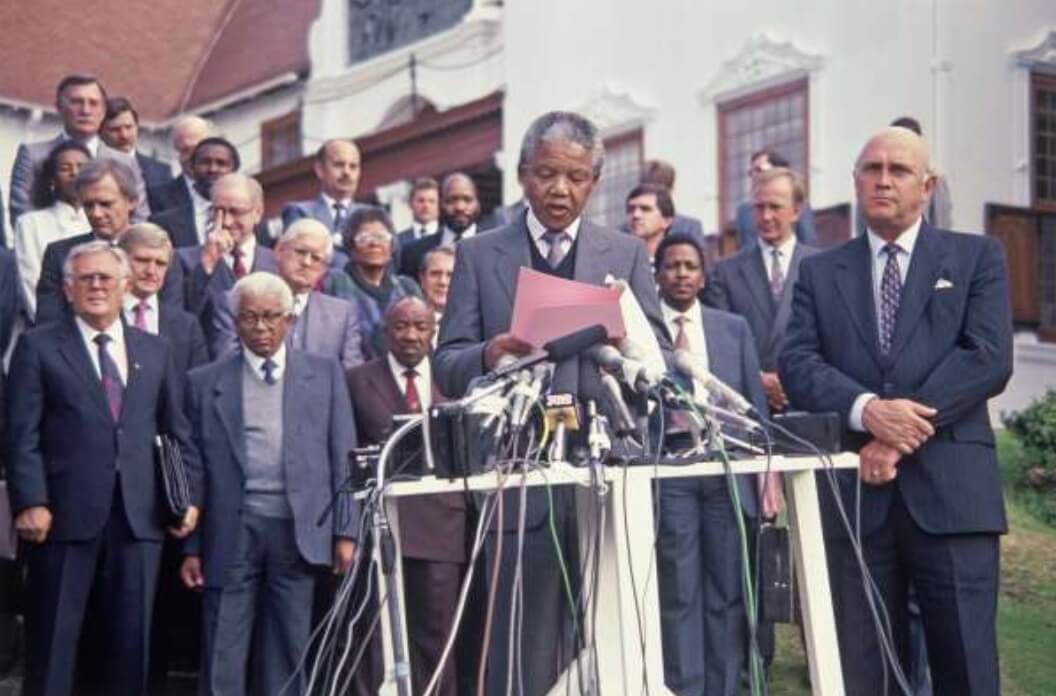 Nelson Mandela’s address after the signing of the Groote Schuur Minute, 4 May 1990. Die Burger / Media 24

-Cheryl Carolus, then member of the ANC negotiating team and the ANC National Executive Committee

“The meeting represented not only what the ANC had been seeking for so many years, but an end to the master/servant relationship that characterised black and white relations in South Africa. We had come to the meeting not as supplicants or petitioners, but as fellow South Africans who merited an equal place at the table.”

–Nelson Mandela, then Deputy President of the ANC

“Those people who went to Groote Schuur were mandated to go and negotiate with the boers (Afrikaners) … Yes Mandela led the delegation … But there was a lot of consultation [in the ANC] around negotiations. Decisions were taken by the collective … Of course people in the ANC or in the alliance had different views … But ultimately when the majority decision is taken it becomes the decision of the movement and not of the individual.”

“Slaves have nothing to gain from negotiating with their masters … We do not need reform. We need a complete overhaul of the entire economic and political system.”

“The De Klerk regime has succeeded in tying up the ANC in the perennial structures designed to delay the struggle, and to water down solutions to our problems in this country.”