The story of COSAG 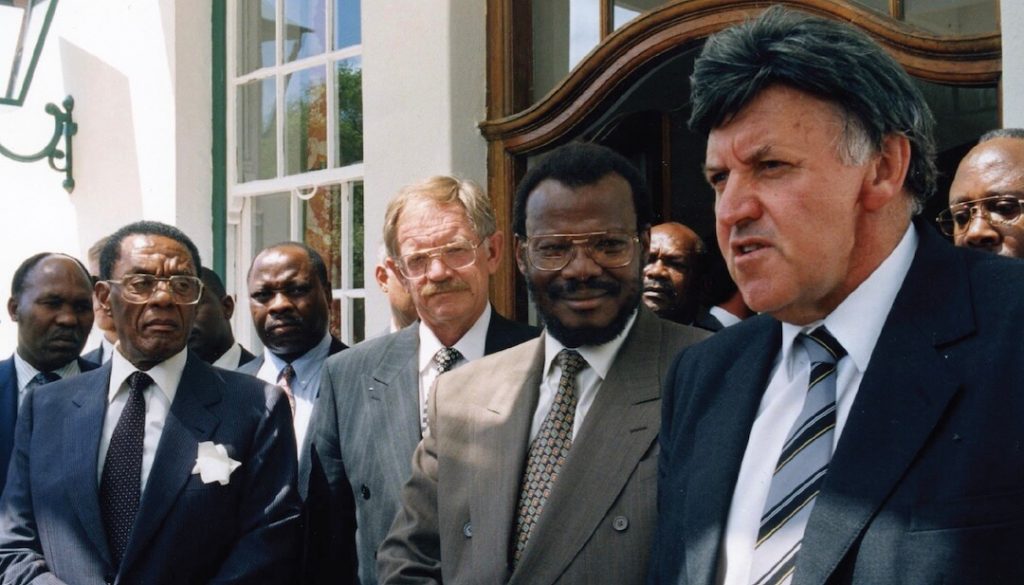 A dramatic shift in
political alliances:

The common perception of CODESA was that the ANC and the Patriotic Front (ninety-two organisations that were united in their opposition to apartheid) had lined up on one side of the table and the government and its allies on the other side. After the Record of Understanding, commentators observed that the NP government and the ANC became the joint driving forces of the negotiation process. Despite continuous attempts to bring the IFP into the process, they often felt that their claims were being ignored.

Chief Buthelezi withdrew all contact with the government, making it clear that he was highly ‘insulted’ that De Klerk was cutting deals with the ANC without him. He told his supporters at a Shaka Day rally that the Record of Understanding was “an attempt to wipe us off the face of the earth as Zulus” and that “Mr de Klerk has made a fundamental mistake … I am appalled and disgusted and so is the IFP and KwaZulu Government”.

This unlikely political alliance formed in June 1993. The parties walked out of the MPNP to garner attention for their demands, and stated that their objections had to be dealt with before the MPNP could progress. Chief Buthelezi and King Goodwill Zwelithini demanded that KwaZulu be declared an independent, sovereign Zulu state and asked their followers to defend this ideal with their lives if necessary. The group disbanded in October 1993 and re-emerged with a new name of the Freedom Alliance in 1994.

The NP and
ANC’s response:

Both parties, as a matter of principle, wanted maximum inclusiveness in the negotiation process. They recognised that the IFP and the white right-wing had the ability to create complete chaos if left out in the cold. They feared a large-scale revolution or uprising, and agreed that the right-wing needed to be ‘part of the solution’, especially if they were to be part of the making of the future constitution and be bound by it. Roelf Meyer, the government’s chief negotiator, successfully lobbied for a resolution which noted COSAG’s objections and referred them to a committee of constitutional experts within the MPNP for discussion. The ANC and NP ultimately agreed to accommodate the hot-button issue of federalism and COSAG returned to the MPNP.

The Role of
the King:

Although the federalism issue was ultimately resolved, the representation of the Zulu monarchy in the post-apartheid constitution remained a thorn in the side of the negotiators. Chief Buthelezi had both a strong connection to the Zulu royal family through his lineage, but he also recognised the loyalty of the 300-odd chiefs that his relationship with the King would bring. It was this issue that almost cost the IFP’s participation in the elections.

“We were all complaining about the unitary state of the white apartheid regime so now we want to do the very same thing again. How can I trust the ANC government now in a unitary state?”

-Gertrude Mzizi, then IFP member and activist in Thokoza

“So, not having a seat or a say at the table, we spoke very loudly from the side. Theoretically, perhaps symbolically, … [we established] the entire KwaZulu-Natal province unilaterally, as a member state of a federation to be established at a later time.”

–Mario Ambrosini, then strategist for the IFP

“The government and the ANC knew that if we didn’t make that agreement between COSAG and us [on the issue of the provinces], we would not have progressed with the negotiations at all. It was in the interests of the country, of the bigger picture, that we made that agreement because otherwise there would have been no progress.”

-Roelf Meyer, then Minister of Constitutional Affair and NP lead negotiator at the MPNP

“Many people believe that the IFP are talking about federalism because Natal is a stronghold and they want to maintain the status quo. Federalism is good for development. We want people to rule themselves, we want to bring the government down to the people.”

–Gertrude Mzizi, then IFP member and activist in Thokoza

“COSAG disrupted the talks when the very issues it wanted addressed were about to come up on the agenda.”

-Colin Eglin, then chief negotiator for the Democratic Party

“In July, at a meeting in Pietersburg, General Constand Viljoen said the potential for conflict was so high that a blood bath was unavoidable if the government does not recognise the demands of the Concerned South Africans Group (COSAG) … He called on Afrikaners to arm themselves and to form pressure groups.”

–Independent Board of Inquiry Report, July 1993