The story of the Sunset Clause 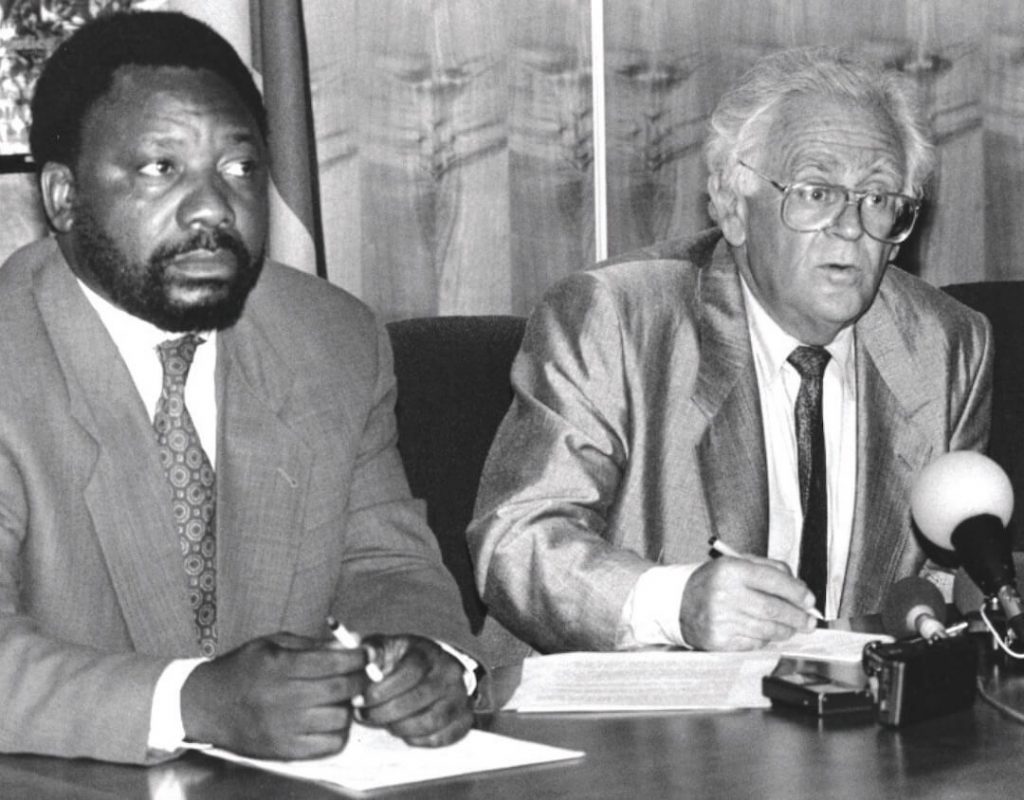 The former secretary-general of the SACP argued that a commitment to share power would be a temporary arrangement which would get to elections, after which the balance of forces would be completely changed. Slovo also recognised that the ANC had no civil service waiting in the wings to take over the running of the country. By his reckoning, a new government would be better off working with the old, predominantly white Afrikaner bureaucracy than having this group sabotage progress. The proposed ‘Sunset Clause’ was the gradual phasing out of white rule rather than a dramatic handover of power.

A passionate and
intense debate:

The members eagerly discussed the position papers written by each. Newspapers carried stories about a possible split in the ANC over the idea of the GNU. At a meeting of the National Executive Committee (NEC), the highest organ of the ANC, members fiercely debated the issue and there appeared to be a deadlock. Slovo and Jordan again spoke  and disagreed. Slovo argued that the ANC was going to get the vote, get democracy, and then after a maximum of five years, they could move the country forward socially and economically without impediment. Jordan’s argument was that the ANC might opt for a coalition government, but it shouldn’t have one forced on the organisation by the Interim Constitution as that would be a denial of self-determination from the very start.

On the second day of the debate, the NEC’s Albie Sachs saw it as an opportunity to lock the NP in government and get a mandate from the nation for a programme of reconstruction and development rather than to have them “outside sabotaging and undermining everything”. The delegates ultimately found agreement in favour of a GNU, Reconstruction and Development. (The ANC’s election manifesto was ultimately based on its Reconstruction and Development Programme (RDP), which promised decent wages, a national security system and redistribution of land along with other things.)

A group of journalists who had been waiting outside the hotel in Hillbrow where the NEC was meeting, was astonished when members came out with smiling faces to announce the ANC’s acceptance of the GNU. The ANC also agreed to guarantee the jobs of members of the apartheid public service for at least five years, and to give consideration to a general amnesty. In response, the NP readily accepted the proposed ANC ‘package’ to finalise negotiations.

The final agreement
on the GNU:

The Interim Constitution spelled out that the GNU would consist of a coalition of all parties that won more than 5% of the vote in the country’s first democratic election, with each of these parties awarded Cabinet seats in proportion to its strength. The leader of the majority party was to become president, with two deputy presidents – one from the party that comes in second in the election and the other from any other party gaining more than 20% of the vote or, if no party achieved this (which in fact was the case), from the majority party. The Cabinet was to rule by majority vote, but with some attempt at consensus.

In the course of the negotiations, there were six sticking points where there was no agreement. These were quickly resolved at this point of the process. The agreement also included repeal of the legislation that granted independence to the ‘homelands’; greater independence for the Constitutional Court; safeguarded boundaries for the nine regions, which would be able to adopt their own constitutions; the name to be given to states (argued by the NP), provinces, and regions (ANC).

“Comrades, we look at a GNU as a trap for us, but what if we see it as an opportunity? …  If we have De Klerk and the others in government, we can control them more easily than if they are outside creating mayhem. Instead of just going into the elections only on a platform dealing with the kind of constitution we want, we also go to the electorate with a programme of social and economic reconstruction. We can call it a Government of National Unity and Reconstruction.”

-Albie Sachs, then a member of the ANC’s NEC and ANC negotiator at the MPNP

“‘Would Comrade Albie agree if we added the word ‘development’ so that it would be a Reconstruction and Development Programme, RDP?’ And Albie said, ‘Of course.’ So that was the unexpected manner in which the RDP came into existence as a product of the constitutional debate.”

–Kader Asmal, then a member of the ANC’s NEC and ANC negotiator at the MPNP

“This was an important achievement in the history of the negotiations because it brought the government and the ANC much closer … The deal ushered in a new phase in the negotiation politics ‘where pragmatism and co-operation in the national interest had set in’. The NP felt secure in the belief that it still had a key role to play in government and could now accept eventual majority rule.”

-Roelf Meyer, then Minister of Constitutional Affairs and NP chief negotiator at the MPNP